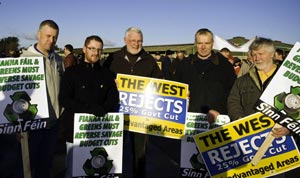 Workers must be united not divided

MARTIN FERRIS is Sinn Féin TD for Kerry North and party spokesperson on Agriculture. Last month he took on an additional new key brief as Sinn Féin spokesperson on Workers’ Rights. Martin Ferris has taken over as spokesperson from Arthur Morgan TD, who is focusing on his brief as party spokesperson on Finance and on completing a report for the Oireachtas Committee on Enterprise, Trade and Employment on creating jobs in the agri-food sector.
Speaking to An Phoblacht about his new role, Martin Ferris said:
“The need to defend workers’ rights has never been more urgent. This is a time of great difficulty for many workers, both for those who have lost their jobs and those who see threats to their wages and incomes on the horizon.
“Concerted efforts are being made to set workers in the private sector against those in the public sector. Workers in low-paid jobs are being told that ‘we are all in this together’ when they had no part in creating the current economic mess and benefited little during the Celtic Tiger era.
“The most important thing right now is that workers unite and while defending their terms and conditions of employment make a stand for an alternative to the failed policies pursued over recent years.”
Ferris is scathing about the failure of the Government to curb escalating unemployment and to provide the levels of training and upskilling required for workers.
“The Government was warned about the dangers in having such an unsustainable dependence on the construction sector. Both the trade union movement and Sinn Féin were calling for investment in training and upskilling going back over the last three to four years when it was obvious that economic trouble was looming as growth was being driven by domestic consumption rather than exports. Yet they did nothing. Young people left school early to enter the construction sector and are now faced with a future on the dole or emigration. This is totally unacceptable and is an absurd waste of their potential. It is no exaggeration that this government is paralysed like a rabbit in the headlights as unemployment continues to grow.”
Martin Ferris says there are a number of important issues to be tackled in relation to the rights of workers.
“It is imperative that the minimum wage is protected. We want to put a stop to the penalisation of workers because of government mismanagement. Sinn Féin is committed to defending the right of workers to have a decent wage.
“We need to be absolutely clear – future economic growth will not be achieved by attempting to make this a low-wage economy. It will be achieved through bringing about innovation, upskilling workers and identifying and supporting those sectors where there is a potential for growth.”
Ferris sees the economic sense of increasing rather than cutting the minimum wage. “Some people might try to argue that you can’t look for an increase in the minimum wage at a time when the economy is in recession but if you look at people on the minimum wage every single penny they earn is going back into the economy directly.
“It’s the same for people on unemployment benefit. They have to spend their money immediately in order to survive. It’s the people who are on huge salaries who can put their money into investment for themselves, including into property. Their money isn’t going back into the local economy in the same way as the money belonging to those on benefits or the minimum wage.
“To cut the minimum wage would actually put another noose around the economy. We should be raising the minimum wage, if anything, both in defence of workers and in the better interests of the economy.”
Ferris summarises his priorities and that of Sinn Féin as he takes over the Workers’ Rights brief.
“Creating jobs for the unemployed and protecting wages are our top priorities. We are committed to protecting jobs and intervening to stop jobs being lost.
“We need to stand up for ordinary workers and support them in resisting downward pressure on their wages.
“Where workers are striking or picketing in pursuit of these goals, Sinn Féin activists need to be there supporting them. We need to oppose any attempts to dismantle existing mechanisms for determining pay and conditions, such as the lobby from certain employers to do away with Employment Regulation Orders.
“We need to oppose any attempt to cut the minimum wage or to cut social welfare entitlements. Sinn Féin is currently campaigning for the restoration of the Christmas social welfare payment which was axed in April’s Emergency Budget.
“Sinn Féin has put forward proposals for radical reform to ensure pension coverage for all - we need to work to get these implemented.
“We will fight for the strengthening of workers’ rights to ensure no employer can exploit the current economic situation to undermine workers’rights.
“We will continue to press for the right to trade union representation and collective bargaining to be enshrined in the Constitution.”
Martin Ferris is also urging all workers to join a trade union.
“People should join the trade union movement because it’s going to be very important for the protection of workers’ rights to be part of a union. It also makes them part of the collective and will ensure that unscrupulous employers will be challenged if they are victimising workers, either through pay or poor working conditions.”