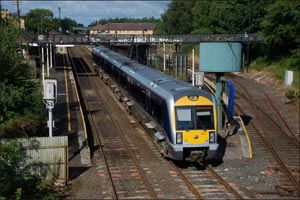 As working people and trade unionists from across Ireland take to the streets this week in defence of jobs and in opposition to cuts to public services, Sinn Féin President Gerry Adams has welcomed the emphasis being placed on defending vital health services at the rallies that are taking place in the Six Counties.
The party has expressed deep concern over the so-called efficiency savings of more than £700 million being demanded by the British Treasury of the health service over the next three years. The cuts may lead to the loss of up to 3,000 jobs, including more than 700 nursing posts, and a drastic reduction in the ambulance service as well as the closure of hospital beds.
Adams said the Executive is facing serious challenges in meeting the efficiency targets demanded by the British Treasury.
“I believe that there are steps we can and must take to defend public services, and already Sinn Féin Ministers in the Executive have taken steps to ensure that key public services such as water and public transport remain under public control,” he said.

Supporting services
Sinn Féin Ministers in government in the North have been pursuing a strategy of investment to protect public services and jobs, and tackling persisting inequalities, poverty and discrimination while advancing all-Ireland cooperation and integration.
Minister for Regional Development Conor Murphy has overseen the investment of millions of pounds into developing efficient, high-quality, affordable and accessible public transport, with a special emphasis on addressing the historic under-investment in the West and North West regions.
Among the investments aimed at modernising rail and bus infrastructure, the Minister last year announced:

As  well as these investments, aimed at improving the quality of the public transport system and making it more attractive than private car use, Murphy also introduced free travel on public transport for all citizens in the North aged 60 and over. While in the 26 Counties and in England, Scotland and Wales those over 65 are entitled to free travel on public transport, the Minister has authorised a further £4 million of funding per year to fund the over-60 travel scheme.
Launching the entitlement on October 1 last year, on the International Day for Older People, Murphy said the scheme would improve the quality of life for over-60s, particularly for those struggling financially, and more than 57,000 people have now taken up their new travel entitlement.

Public control
As well as developing sustainable transport, Sinn Féin has used its role in the Department of Regional Development to ensure that water remains in public hands.
Despite the obvious eagerness from London to have the government water company in the North sold off, Murphy has firmly ruled out any moves towards privatisation of the water and sewerage services and voiced his commitment to ensure “it will remain in full public ownership now and in the future”.
Sinn Féin has campaigned since 2001 against the plans made under direct rule ministers to force citizens in the Six Counties to pay a new charge for water when they already pay for this vital service through rates.
In 2007 the Minister commissioned a two-part Independent Review into Water and Sewerage Services which recognised the contribution households already make through regional rates and ruled out double charging and private profits being made from the service.
Responding to the increased financial pressures households have come under in the context of the recession, Sinn Féin recently brought forward a successful motion to defer any decision on the funding arrangements for the water service until beyond 2012, when the North’s economic situation would be reassessed by the Executive. The Executive agreed to cover the cost of domestic water use until that time.

Investing for equality
Sinn Féin Minster for the Department of Agriculture and Rural Development Michelle Gildernew has authorised large injections of much-needed investment to regenerate rural communities in the North, promote all-Ireland development and provide assistance to rural households struggling to cope financially.
Gildernew has organised the investment of £10m to tackle rural poverty through fuel support, rural transport and rural childcare initiatives. Over the next five years, the Sinn Féin Minister will be investing £530m into rural areas of the Six Counties.
Last  December Deputy First Minister Martin McGuinness helped secure a £15m financial hardship package to provide assistance in housing, fuel and debt costs for those most vulnerable to the effects of the economic downturn.
The most significant changes taking place in a government department in the Six Counties is the radical, progressive reform of the education system, being led by Sinn Féin’s Education Minister Caitríona Ruane. She is advancing a radical programme of modernising education, based on replacing the failed academic selection system with Area Based Planning to facilitate the development of post primary education provision.
The £700 million Schools Modernisation Programme launched by Ruane of investment in the schools estate over the next three years contrasts starkly with the chronic underfunding of education in the 26 Counties. The Department of Education also began introducing a revised curriculum in September 2007 which offers more subjects and choice to students. The Entitlement Framework aims to overcome the limitations many schools face in delivering educational choice, and a major literacy and numeracy improvement strategy has also been launched.

Economic powers
Sinn Féin ministers in government are demonstrating their commitment to defending public services, to advancing the all-Ireland agenda and overcoming poverty and inequality.
But the unfolding crisis in health care provision clearly shows that more must be done to defend the public sector as a whole and front line services in particular. The proposed cuts are in part poor-decision making and priorities and wastage by the Health Minister and trusts, but the deeper problem is the framework of the British government’s pro-privatisation economic policies and its refusal to address the legacy of its historic under-funding of vital services in the North.
The British Treasury in its April Budget announced that £123m in ‘efficiency savings’ that the Executive has been ordered to make in 2010-11 could not be retained and reinvested in frontline services and infrastructural projects.
Responding to the move, and to the drastic health cuts proposals, Sinn Féin has repeated its call to the other parties to support the acquisition of greater fiscal powers for the Assembly.
“The scale of the crisis being unleashed on the health service demonstrates sharply the need for decision-making powers about the economy to be in the hands of locally elected and accountable politicians,” Adams said.
“Our immediate priority is the defence of front-line public services and to tackle health inequalities and ensure that vulnerable people, people living with disadvantage and poverty, and those most at risk are protected.
“Ending duplication and maximising the scale of economies through greater all-Ireland workings could release millions back into service delivery. I also believe that the proper implementation of the Investing for Health Strategy introduced by Bairbre de Brún when she was Health Minister can deliver huge savings.
“It is time to mobilise, agitate, educate and politicise for real change. These ICTU  rallies are an important part of the campaign to defend public services that must continue beyond the day itself,” Adams said.