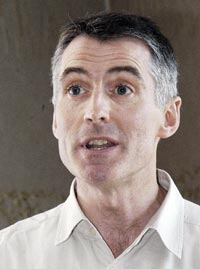 JONATHAN POWELL describes in his book, Great Hatred, Little Room, the political relationship between himself, Tony Blair, Peter Mandelson, and David Trimble in the period leading up to and beyond the Good Friday Agreement. Blair and Mandelson defined their political role in terms of support for and compliance to Trimble and his party. There is no surprise for Irish republicans in this.
The same British/unionist negotiating style which Powell describes is now shared by Gordon Brown, Shaun Woodward, and Peter Robinson. This is directly causing the present impasse in the negotiations on policing and justice transfer.
You could be forgiven for thinking these negotiations had only recently begun, given the comings and goings of recent weeks. That, of course, is not the case. The negotiation on policing and justice transfer was settled in October 2006. Remember that... the St Andrew’s Agreement? The British and Dublin governments, DUP and Sinn Féin dealt with all outstanding issues in a comprehensive negotiation.
The extraordinary Sinn Féin Ard Fheis followed in January 2007. Elections took place in March. The institutions were reinstated in May. Full transfer of powers was then scheduled to be completed by May 2008.
Everyone agreed that it was all done and dusted. No mention of further preconditions or prevarication. Ian Paisley showed leadership and brought the DUP across the Rubicon.
But, within 12 months, Peter Robinson had replaced Paisley and changes were happening in Britain.
Two years later, and Robinson has become indistinguishable from David Trimble in how he deals with the Executive, engages with Sinn Féin, and conducts negotiations – without learning the political lessons.
And the British Government appears no more able to deal with the dithering, indecisive leadership of unionism in its DUP form than when it emanated from within the UUP.
The final elements of the plan to deliver policing and justice transfer were put in place two weeks ago when the financial package was agreed.
In the lead-up to this, the DUP continuously prevaricated whilst demanding movement on unconnected side deals. But with Martin McGuinness leading the negotiations a package was agreed. It was then that Robinson to introduced a new precondition in the shape of the parades issue.

CRYSTALISED
Peter Robinson’s deficiencies as a political leader have crystalised for all to see in the weeks immediately post the summer recess – indecision, avoidance and now obstruction... all in that order.
Indecision and avoidance as he continually agreed, then disagreed, then agreed to have meetings with Sinn Féin.
A similar pattern and approach to successive meetings with Gordon Brown and Sinn Féin in London over policing and justice and followed by equivocation over whether to embrace US attempts to assist negotiations in September and October.
Then more distraction with his repeated referral of essentially the same financial proposal to his party’s officer board.
And all of this against a backdrop of Robinson’s oft-repeated mantra that ultimately the critical decision on transfer would be made by an undefined test of community confidence.
Before the summer it was obvious that a financial package could be agreed. As discussions moved inexorably towards agreement, Robinson and his team simultaneously began to shift the negotiations goalposts to include a number of side deals, including a £20 million backhander to ex-RUC reservists and legal weapons for former UDR and RUC combatants.
But as Brown, Woodward and Robinson addressed the choreography on DUP acceptance of the financial package and British compliance with a DUP shopping list, Robinson raised the bar at Westminster with a declaration that dealing with controversial parades is also a precondition to transfer.

MISTAKEN ASSUMPTIONS
The DUP and NIO have played fast and loose with these negotiations. Their introduction of the parades precondition may not necessarily mean they are opposed to the transfer of powers... although it might. But it demonstrates they are considering the reckless scenario of pushing transfer of powers beyond next year’s Westminster election. And the DUP may still plan to raise new and more preconditions
It is likely, for different reasons, that the DUP, NIO, Woodward, and Brown are basing short-term, tactical expediency upon three mistaken assumptions:

They are codding themselves and no one else!
The political institutions are only of value if they deliver and if they deliver in the terms agreed on Good Friday and at St Andrews. They are also seriously misjudging the widespread desire for the transfer of policing and justice to go ahead.
Republican strategy is long-term and very patient.

SUB-TEXT
The sub-text to everything going on is that unionism is in a place where some unionists do not want to be.
Currently, the DUP is a divided house. It includes those who appear willing to follow the lead set by Paisley; others prepared to go with the flow; and those who will deliberately obstruct progress because they hanker after the old unionist one-party state.
Add the UUP and Jim Allister’s TUV to the mix and, overall, unionism has up to five different tendencies. And more political change in the North makes more disarray and volatility in the rejectionist wing of the unionist body politic inevitable. And the tendency in the unionist leaderships and the NIO is to allow them to set the agenda.
Hence Peter Robinson’s obstructionism and Shaun Woodward’s total compliance.

GAMBLING
The NIO and Downing Street are gambling with policing and justice transfer in a misdirected bid to address the agenda set by rejectionist unionists in an increasingly competitive electoral context – and without learning the political lessons. Principal amongst these, in my opinion, is that a majority of the unionist electorate still want to move forward on the agreed basis. Much better to listen to this voice than to the siren song of Jim Allister or Campbell’s ‘Gregorian Rant’ which assault our ears from time to time in support of a return to the Protestant state for a Protestant people. This, clearly, is unacceptable, unavailable, unobtainable.
They cannot arrest the momentum for change in the North.
And our role in that is central.
Nothing galvanises the republican base like a gang-up by the unionists and British. Nothing focuses the republican organisation more than an election. The next Westminster election is now less than seven months away.
The NIO and DUP strategists ought to remember that election results bring their own dynamics and pressures. Last June’s European poll in the North comes to mind.
The old unionist one-party state has  gone forever. Today, unionists can exercise power in the Six Counties only if they accept partnership and equality. And, if the DUP can’t do partnership and equality, then it won’t be doing government either!
So, Robinson does have decisions to make.
Sinn Féin is in no such place.
The republican political project won’t be blown off course by DUP or NIO brinkmanship. It will remain intact regardless of DUP recklessness or fall-out from continued unionist disarray because our political objectives follow a national trajectory.
Wider nationalist opinion has this impasse sussed out. So republican activists need to keep our nerve and patiently step through this latest DUP/British manoeuvring. With a clear analysis of what’s happening we should now move directly onto intensive preparations for the Westminster election campaign next spring and with maximum resolve and determination.
The DUP’s and British Government’s short-term expediency has all the potential to push this impasse into complete free-fall – they still aren’t learning the political lessons.