Onus is on Orange Order to engage - Adams 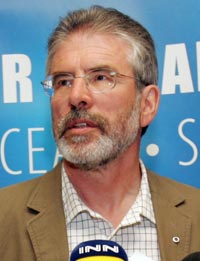 SINN Féin President Gerry Adams has called on the Orange Order to engage in dialogue with local residents to resolve the small number of remaining contentious parades.
Gerry Adams was commenting on the DUP insistence that the resolution of the Parading issue become a pre-condition to the transfer of policing and justice powers.
He said:
“Many citizens will be concerned at the DUP’s insistence that the issue of contentious orange parades be resolved as a precondition to them agreeing to the transfer of policing and justice powers.
“It has always been Sinn Féin's position that the issue of parading can only be resolved through dialogue between the loyal Orders and local communities.
“Irish republicans accept and respect the rights of the Orange institutions to parade and promote their sense of orangeism.
“But this has to be done on the basis of equality and mutual respect and tolerance.
“The Orange Order and Orangeism is part of who we are as a nation. Irish republicans want a dialogue with the loyal institutions in order that we can understand and appreciate each other’s position.
“As a society, we cannot afford the negative and unsustainable political, financial and social costs that flow from parading disputes.
“While the overwhelming majority of orange parades take place without rancour or dispute, there are a small number each year which give cause for concern.
“I am again asking the Orange Order to engage in dialogue with local residents to resolve these contentious parades.
“Let us together seek to resolve this issue in a common sense and respectful manner.
“Regardless of what structure is in place to mediate on contentious parades there can be no resolution or agreement without dialogue.
“Sinn Féin have no agenda other than to facilitate and help in whatever way we can to create a context and  climate where local disputes can be resolved locally.
“All those in positions of leadership within our society have a responsibility to encourage this process.