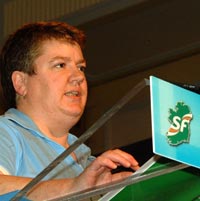 DESPITE assurances from the North’s Health Minister, Michael McGimpsey, that “efficiency savings” in the Department of Health would not impact on frontline services, he has approved proposals to cut hundreds of nursing positions, remove beds from hospitals and drastically reduce ambulance services.
There is growing anger among health and social care professionals, trade unions and the broader community as the cuts threaten to seriously erode the quality of care in the North’s healthcare system and attack the rights of health workers.
Trade unions are discussing plans to take industrial action against the cuts and Sinn Féin is urging everyone concerned about the cuts to join the public rally in support of the health service and workers in Belfast on Friday 6 November at City Hall.
The British Treasury in London has demanded that the Department of Health makes £700 million in cuts (so-called “efficiency savings”), over three years. The Comprehensive Spending Review (CSR) announced by the British Government is ostensibly aimed at reducing bureaucracy and reinvesting funds into frontline services – but in reality it is simply cutting public funding to the health service.
The North’s six health trusts are currently bringing forward proposals to the minister on how they plan to achieve their saving targets. The CSR set a 3% reduction target in the North’s health department and has led to the recommendation that almost 3,000 jobs be cut in the Belfast area alone. On top of the funding cuts, the trusts face a combined end-of-year deficit of £76 million.
Speaking to An Phoblacht this week, Sinn Féin MLA and member of the Assembly’s Health Committee Sue Ramsey said several crucial issues had been raised by the proposals made by the health trusts and the department, including the impact on the health of the community and the livelihood of staff employed by the trusts.
“These proposals will lead to a crisis in the North’s health service, which is already under strain,” Ramsey said.
“We are also concerned about the lack of transparency and consultation in the process through which the proposals have been made and approved.
“It is time for a clear policy change. So-called efficiency savings are affecting frontline services and local people’s health provision. We can no longer check cuts to health services through the current framework. It is simply not working.”

HITTING FRONTLINE SERVICES
The Belfast Health and Social Care Trust, the largest trust in the Six Counties and employer of 22,000 people, has been directed to cut 9% of its spending, or £130 million, by 2011.
When the CSR’s drastic proposals for cuts provoked a public outcry in 2007, McGimpsey insisted the proposals were not policy and that frontline services would not suffer. However, the Belfast Trust has brought forward many of the exact same proposals, which have now been approved by the minister.
Some of the cuts proposed include:–

Other actions that have been proposed include a greater reliance on a ‘skills mix’ within the medical profession – that is, relying on less-qualified healthcare workers to carry out the work of nurses and midwives to cut costs. The Belfast Trust additionally plans to ban staff overtime and stop all use of agency nurses.
There is also a push to have patients stay in hospital for the shortest time possible, including those who have undergone surgery. Women’s health professionals have expressed dismay at the Belfast Trust’s plans that new mothers be released from hospital just six to 12 hours after they give birth.

‘UNACCEPTABLE’
Commenting on the proposals, Sue Ramsey said the Belfast Trust’s ‘efficiency saving’ proposals were “unacceptable and unsustainable”.
“These proposals are supposed to free up resources to be reinvested in frontline services but you cannot get more frontline than the ambulance service, the targets of the cuts,” she said.
“Similarly, the backbone of the health service are its nurses – cutting more than 700 nursing positions would not only impact on the quality of care provided, it will place enormous pressure on the remaining nurses.”
The Sinn Féin MLA argued that these proposals essentially try to shift responsibility for medical care provision onto the already strained community sector to cut costs.
“While the community sector plays a vital role in health and social care, medical care must be provided by fully-qualified medical professionals.
“And while these so-called efficiency savings are supposed to be reinvested into frontline services, there is no guarantee or mechanism to ensure this is the case.”
Discussing the impact the cuts would have on health workers, Ramsey said the Belfast Trust’s plans to stop recruiting new staff, ban agency workers and overtime would impact on the most vulnerable and lowest-paid health workers.
“Clerical staff on agency or temporary contracts are already without maternity cover, holiday leave or pension entitlements,” she said. “I want to know how this strategy has been assessed against the trust’s legal duty to promote equality.”
Ramsey told An Phoblacht there is also anger among the Assembly’s Health Committee and trade unions due to the lack of transparency and consultation on cutback proposals before their approval by the Health Minister.
“I have submitted questions to the minister about the Belfast Health Trust. When did they first know about the proposed cuts to staff, facilities and services? Who else knew about these cuts? Why did they not bring these cuts to the attention of the committee or others before they began to impose them?”

HEALTHY COMMUNITIES
The Sinn Féin MLA said there are “undoubtedly” real efficiency improvements that could be made in the health service, such as addressing high levels of bureaucracy, top-heavy management and outside consultancy fees.
Sinn Féin has called for the comprehensive Investing in Health strategy proposed by Bairbre de Brún when she was Health Minister to be implemented as a way to strengthen the health service and integrate it with other departments and social agencies, such as housing and education bodies for example.
“This strategy has the potential to save millions of pounds in the health budget by taking a holistic approach to preventative health care,” Ramsey explained.
“All Government departments, agencies, social partners and community organisations must realise that to invest in health will transform our society and cut down on expenditure on treating preventable illnesses.
“Ultimately, these proposals are being driven by the British Government’s agenda of privatising and attacking the public health service and other public services,” Ramsey said.
“Sinn Féin proposed during the first session of the Assembly that we should have tax-varying powers so that we could raise taxes if needed for essential services; however, all the other parties opposed this.
“The scale of the crisis being unleashed on the health service demonstrates sharply the need for decision-making powers about the economy to be in the hands of locally elected and accountable politicians.”