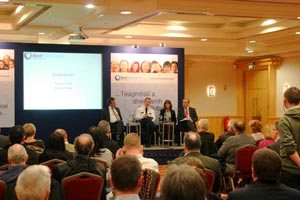 A LANDMARK event, marking the first time the Policing Board have provided a forum in Belfast for Irish-speakers, was held in the Hilton Hotel in Belfast city centre last Wednesday week, 21 October.
The event was the second in a series of four Policing Board meetings aimed at the Irish-speaking community in the Six Counties.
Sinn Féin members of the Policing Board had previously stressed the importance of the PSNI providing services for Irish-speakers and accepting the need to engage with the substantial Irish-speaking community, particularly in West Belfast.
On the evening, presentations were made totally in the Irish language by Policing Board Chairperson Barry Gilligan; Policing Board member and former Sinn Féin Mayor of Derry Gearóid Ó hEara; West Belfast DPP member and ex-POW Rosie McCorley; PSNI Inspector Gabriel Moran and PSNI Education Adviser Dympna Thornton.
The presentations were followed by a question and answer session chaired by well-known west Belfast Gaeilgeoir and Irish-language activist Fergus O’Hare.

CRITICISM
A wide range of questions and comments then followed.
East Belfast Sinn Féin representative Niall Ó Donnghaile heavily criticised the PSNI’s use of plastic bullets in the summer period, pointing out the lethal nature of these weapons and the many deaths that have occurred from their use.
North Belfast republican Seán Maguidhir questioned the PSNI on the free role that police agents such as Mark Haddock had to murder innocent Catholics with the full knowledge of members of the RUC.
West Belfast Gaeilgeoir Grainne Holland raised the vital issue of anti-community criminals being released after only short periods in custody and emphasised the importance of the transfer of policing and justice powers to local institutions.
The PSNI’s use of stop-and-search tactics during their recent ‘Operation Descent’ was raised and West Belfast DPP member Rosie McCorley said:
“The recent PSNI stop-and-search operation was criticised by speakers tonight as being unwarranted and unnecessary, and the point was made strongly that PSNI efforts to build relationships with our community are undermined by this type of policing which belongs in the past.”

TRANSLATION
Belfast Media Group Director Mairtín Ó Muilleoir, Eoghan O’Neill from Raidio Fáilte, teachers and other Irish-language activists and speakers from throughout Belfast also took part in the open session.
The issue of translation facilities for Irish-speakers when dealing with the PSNI was raised along with the importance of teaching more PSNI officers Irish, recruiting more Irish-speakers, interacting in a positive way with young Irish-speakers and continuing to move towards equality for the Irish language within the PSNI.
Andersonstown Sinn Féin Councillor Caoimhín Mac Giolla Mhín, who was present at the meeting in the Hilton, said:
“Many important points were made tonight in this meeting which was conducted totally in our national language.
“The battle for equality for the Irish language has been fought for a long time but we still have a long way to go.
“This meeting is a start and we must keep pressing for our rights and for Acht na Gaeilge.
“The news that the Belfast Principal District Policing Partnership agreed, at a meeting on Tuesday 20 October, to adopt the language policy of Belfast City Council is also a welcome step forward but our primary goal for our language remains full equality.’’