COLLUSION: Relatives take their cases to the United States Congress on Capitol Hill 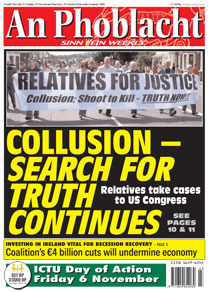