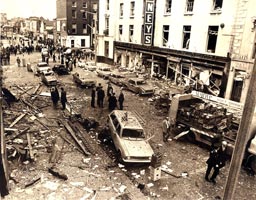 Talbot Street after the Dublin bombings

Taoiseach Brian Cowen must confront the British Government on its refusal to comply with a request from the Dáil to release all relevant documentation regarding the Dublin and Monaghan bombings of May 1974. That was the demand by Sinn Féin TD Aengus Ó Snodaigh Speaking in the Dáil on Wednesday.
“The Dáil unanimously passed a motion which was sent to the British Parliament and which called on the British Government to release all relevant documentation regarding the Dublin and Monaghan bombings of May 1974 and for this information to be assessed by an independent international authority. Given the refusal of the British government to comply with this request of the Oireachtas what course of action does the Taoiseach propose to take now? Does he agree this is a very serious issue and that the lack of action on the part of the British government must be confronted?”, ó Snodaigh asked.
The Dublin South Central TD went on to inquire whether the Taoiseach also agreed that the issue shows clearly that any process of truth recovery relating to the conflict must be anchored not by a body nominated by the British Government but by an Independent International Truth Commission.
“Has the Taoiseach yet had any detailed discussions on this matter and has the Government established a position on the Eames/Bradley proposal for what would be, in our view and the view of many others, a ‘Legacy Commission’ that would be neither independent nor international?
“Does the Government support the proposal for an Independent International Truth Commission which both governments would authorise the UN or a similar body to establish?
“Has the Government sought from the British government information on the claim by former RUC Special Branch officer George Clarke that there was a plan to blow up the Sinn Féin office in Dublin in 1971? Shouldn’t this be pursued in light of the fatal bombings by British agents that did take place in Dublin in 1972 and 1974?” he asked.

‘cop-out’
Ó Snodaigh went on to say that it was a “cop-out” for the Taoiseach to state that it is up to the Dáil to discuss these matters.
“As the leader of the Dáil, I presume he would have had  – perhaps he can enlighten us    – conversations with the British Government representatives. If the Irish Parliament passed a resolution and sent it to the British Parliament asking for action to be taken, I presume, as would all in this House who passed that resolution, that the Taoiseach would pursue it at intergovernmental level”, he said.
Sinn Féin’s Justice Spokeperson went on to ask whether the Taoiseach or any of the representatives sought from the British Government information on the recent claim by a retired RUC Special Branch officer, George Clarke, that British agents were involved in initiating plans to blow up the Sinn Féin offices in Dublin in 1971.  “How many other plans were initiated and carried out in this jurisdiction?”, he asked.
An Phoblacht
44 Parnell Sq.
Dublin 1
Ireland