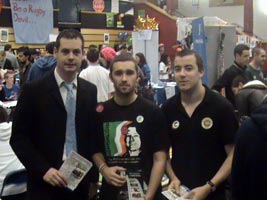 DUBLIN Ógra Shinn Féin are set to become the most active society in Dublin’s universities.
Hundreds of new applications to join were made over the last month at freshers’ events. Ógra Shinn Féin societies were represented in the following universities:-
•    Trinity College
•    University College Dublin
•    Dublin City University
•    Griffith College
•    Dublin Institute of Technology
Sinn Féin flags were hoisted and freshers’ packs handed out to applicants who signed up in their droves. A high-quality newsletter, DVD on the history of the republican struggle, stationery and a copy of the Proclamation were included in the packs.
Application figures have surged since last year, signalling a rise in political awareness among students opposed to fees and other policies introduced by the shambolic Government.
Asked about the attraction of Ógra Shinn Féin, one student said she wants to be active in the campaign against fees and she cited the general ineptitude of Fianna Fáil and the Greens in power.
Another student claimed that Ógra Fianna Fáil were “ran like dogs” from a freshers’ event in DCU!
Ógra activist Daithí Byrne said of the surge in applicants:
“Students are saying they are attracted to our radical politics and activism displayed over the years in Dublin, most recently the anti-fees campaign. They aren’t satisfied with the ‘all talk no action’ policy of other opposition groups like Young Fine Gael.”
Paddy Daly, Dublin college co-ordinator, commenting on the successful freshers’ campaign, said:
“This has been a huge success for us with people genuinely interested in getting involved in republican politics and activism.
“The priority for me will be to build a new college structure for Dublin ÓSF and organise events such as protests that will put us on the map.”
After a spectacular freshers recruitment drive, Dublin Ógra Shinn Féin are putting education and introduction to Sinn Féin high on the agenda, which will include one-to-one meetings with each applicant. Anti-fees will also be high on the agenda for the coming weeks.
To contact Dublin Ógra Shinn Féin, E-mail: dublin [email protected]
An Phoblacht
44 Parnell Sq.
Dublin 1
Ireland