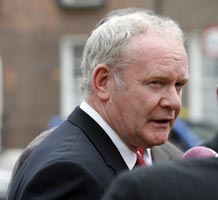 DONEGAL Fianna Fáil TD Niall Blaney has misrepresented comments on the Lisbon Treaty and the EU made by Sinn Féin’s Martin McGuinness at a Letterkenny Chamber of Commerce lunch attended by both men, the deputy First Minister has insisted.
Bristling at a powerful performance by Sinn Féin Senator Pearse Doherty when Pat Kenny’s RTÉ radio show visited Donegal last week to examine reasons for the highest No vote to the Lisbon Treaty, Deputy Blaney noted that Martin McGuinness had visited the county earlier this year but went on to claim:
“Martin McGuinness spoke about the resolve of the people in Northern Ireland to back pro-European candidates in the Euro Parliament elections in June. He said that he saw Ireland’s future as a firm member of the European Union and that he said that he saw Northern Ireland’s future as within the Eurozone.
“He pointed to the fact that more than 80% of people who voted in the North elections in June voted for pro-European candidates and referred to the fact that that number was even higher than the 71% of people who voted in the Good Friday Agreement referendum that supported it.
“Yet although they claim to be an all-island party, Sinn Féin in Donegal and elsewhere in the South seem to disregard the views of their deputy First Minister.”

PUTTING BLANEY STRAIGHT
Martin McGuinness put the record and the Donegal Fianna Fáil TD straight this week.
“Perhaps if Deputy Blaney had been listening he wouldn’t look so foolish in his interpretation of the Sinn Féin position of the Lisbon Treaty vote.
“Far from differing from my Dáil and Seanad colleagues and all of those Sinn Féin activists who campaigned against the Lisbon Treaty, I very clearly articulated the party’s firm position on the treaty.
“Where Deputy Blaney gets confused is when he gets mixed up between my articulation of Sinn Féin’s view that Ireland should be at the heart of Europe – a position regularly put forward by Party Vice-President Mary Lou McDonald – and my comment on the result of the recent European election in the North relevant to the challenge by Jim Allister.
“I said that Jim Allister received 11% of the vote which meant that over 80% of those voting supported ‘pro-Agreement’ parties, which was even more than voted for the Agreement itself – not ‘pro European’ candidates.
“A good lesson for Deputy Blaney would be to learn to listen to what people say, not what he thinks they said.”
An Phoblacht
44 Parnell Sq.
Dublin 1
Ireland