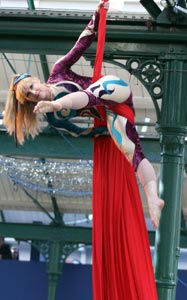 AN GHAEILGE: Rights and revelry

Under the heading of Rights and Revelry Irish langauge enthusiasts gathered in St George’s Market, Belfast last Sunday  11 October for a day of craic but also to highlight the demand for an Irish Language Act for the North.
The day was officially opened by Alun Ffred Jones who is the Culture and Heritage Minister in the Welsh Assembly.
He praised Pobal, the Irish Language umbrella group which organised the day and encouraged people to continue to promote and support the Irish language.
In what was clearly the Irish Language event of the year hundreds of gaeilgeoirí flooded into Aonach Naomh Seoirse for a day of fun, entertainment and craic in a demonstration of support for the langauge.
The vibrancy of the day lent itself clearly to the enthusiasm so many people have for the language.
People travelled from across the North to attend the event.
On show were dramas and school choirs. Pupils from Bunscoil Mhic Reachtain in North Belfast and Bunscoil Phobail Féirste provided musical entertainment while students from Colaiste Féirste performed a scene from the hit musical Grease.

Language Act
Speaking to An Phoblacht, Sinn Féin President Gerry Adams said, “It is now three years since the British Government made a commitment at St Andrews to introduce an Irish Language Act. Both they and successive DUP Ministers have failed the Gaeilgeoir community miserably.
“Despite this the Irish language is alive and growing. Irish speakers make a huge contribution to society and I thank and commend them for that.
“I commend Pobal, the organiser of the event, for giving the Irish speaking community the opportunity to celebrate everything Irish speakers have achieved even in the absence of an Act.”