CUBA: New Cuban Ambassador appeals to Ireland ahead of UN vote this month 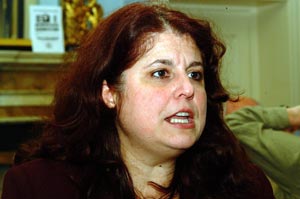 THE new Cuban Ambassador to Ireland, Teresita Trujillo, tells An Phoblacht that despite expectations and the general perception by the International Community, the new US administration under Barack Obama has not meant a change in their  blockade policy against Cuba.
On the 28th of this month, the United Nations General Assembly will be asked, for the 18th consecutive year, to vote a resolution to end the 50-year-long US economic, commercial and financial blockade of Cuba.
Last year, the resolution was supported by 185 countries, which is regarded as an almost unanimous demonstration of the international community’s rejection of this policy of the US Government against Cuba, which until the end of 2008 had caused loses amounting to $96 billion and of the enforcement of extra-territorial laws contrary to the UN Charter.
Ambassador Trujillo explains that the report submitted by Cuba to the UN Secretary General has sufficient evidence on its enforcement, which includes the following prohibitions:
•    Cuban exports of goods and services to the United States and exports from the United States to Cuba.
•    US subsidiaries based in third countries from engaging in any transaction with enterprises in Cuba.
•    Enterprises of third countries from selling goods or services to Cuba containing more than 10% of US components, even if the owners of such enterprises are nationals of those countries.
•    Banks of third countries from opening accounts in US dollars to Cuban entities or persons. Nor can these banks make financial transactions in US dollars with Cuban entities or persons.
•    Ships transporting goods from or to Cuba from calling on US ports for the following 180 days, which significantly increases the cost of maritime transport and reduces the availability of freights for Cuban foreign trade.

In addition to the above, she adds:
“On 14 September last, President Obama extended the enforcement against Cuba of the Trading with the Enemy Act, only applicable in cases of war or national emergency, and on which the first regulations of the blockade against Cuba of 1962 are based, thus showing not only that the legal framework remains untouched, but also that the current Administration is determined to make use of it.”
Since President Obama’s accession, over 50% of the funds collected by the Office for Foreign Assets Control (OFAC), according to the figures of the US Treasury itself, comes from the sanctions for alleged violations of the blockade against Cuba.

BLOCKADE HURTS CHILDREN
“The blockade,” explains Ambassador Trujillo, “is not just cold figures, it has a direct impact in the lives of Cubans since it tackles very sensitive areas such as health and food supplies, and it is a flagrant, massive and systematic violation of the human rights of an entire people.”
Just to mention one example, US companies NUMED, AGA and Boston Scientific are not permitted to sell to Cuba the necessary inputs for children with cardiovascular diseases to have open-heart surgery and eight new cases have added to last year’s list in a country that prides itself of the high standards of its health system and their international vocation in assisting a large number of developing countries.
“In the meantime,” the Ambassador notes, “US Vice-President Joseph Biden has clearly expressed that the United States will maintain the blockade as ‘a tool to apply pressure’ on Cuba – as if human lives and the efforts of my countrymen and women to recover from the devastating effects of three major hurricanes just a year ago could be a pawn in this outdated and genocidal policy.”
“The US blockade of Cuba is the longest and cruellest in history. Independence has a high price; my people have shown incredible courage in defending its independence and its right to self-determination for over a decade and are committed to continue doing so, knowing that the overwhelming majority of the international community supports them in their legitimate call for the blockade to be lifted.
“As in previous years, on behalf of my people, on behalf of those children awaiting surgery, I ask the Irish people and Government to support once again our resolution at the UN, and thank them for having consistently done so in the past.”