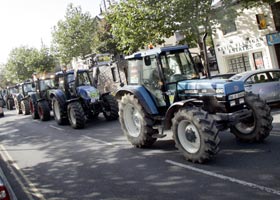 FALLING INCOME: Farmers held a series of protests around the country on Monday

THE Sinn Féin Spokesperson on Agriculture Martin Ferris TD voiced his support for farmers who are engaged in a series of protests around the country on Monday in relation to falling incomes and other problems affecting the sector.
The Kerry North TD said: “Farmers, in common with many other sectoral groups, are feeling the impact of the current economic downturn. And, as with other sectors, the impact of the recession has been exacerbated by a series of negative Government policies particularly in relation to the withdrawal of funding.
“As I said in relation to the last Budget cuts and the ending of various schemes as well as wholesale cuts in Teagasc and the general area of research, there appears to be no positive thinking in Government. The cuts in farming, as elsewhere will simply make things worse.
“What we need is a radical new approach that recognises that the state can help to speed recovery by directing resources into projects. That applies in farming as much as anywhere else where the cuts have impacted on a whole range of other areas. What needs to be done is for the cuts to be restored and investment directed to the many positive aspects of Irish farming and the rural economy generally.”
An Phoblacht
44 Parnell Sq.
Dublin 1
Ireland