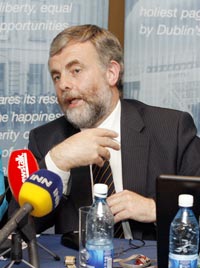 IRISH Government budget figures do not add up, there is still no strategic response to the economic crisis and by the way the poor, the vulnerable, and those still working on low to middle incomes will have to carry the can.
This was the summary message from two new think thank reports launched this week by the National Economic and Social Council (NESC) and the Economic and Social Research Institute (ESRI). Also giving his opinion was the recently appointed Governor of the Central Bank Patrick Honohan, who has supported further wage cuts for Irish workers.
Both point the way to another bruising budget for that sizable section of low income Ireland, who have over the past year coped with a 183,000 rise in unemployment, wage cuts as well as the systematic run down of social, health and education services, which they rely on now more than ever.
The NESC have in a new report to Brian Cowen argued that further tax rises are needed to fill what they describe as a “huge gap” in public finances. This will not mean higher income taxes or the much needed new third band of income tax for Ireland’s high earners.
Instead they propose broadening the tax base, which in reality usually means stealth charges, so maybe domestic rates will follow water charges for Irish homes in the next year.
Most telling perhaps in the NESC report is the assertion that over a year into dealing with economic downturn the government have failed to produce a coherent strategy to respond to the crisis.
Calling for a new job creation programme NESC conclude that a ‘nationally supported and widely understood response has yet to be achieved’.
The ESRI’s quarterly commentary launched on Tuesday 13 October provides a sober assessment of the 26-County economy. GNP will fall by 8.9% in 2009 and by 1.7% in 2010, so it would seem that the economy has hit a temporary bottom for now. There is a possibility that growth will return in the last quarter of 2010.
Unemployment they forecast will peak at 15% with 1.85 million at work in 2010, with some emigration out of the economy, they are predicting a net outflow of 8,000 people for 2009.
This must be evaluated against a backdrop where German, French and Japanese economies have all returned to growth, with forecasts that the US economy will also register growth figures in the second half of 2009.
One of the main differences between these economies and Ireland besides the scale is that in each case an economic stimulus package was implemented by government where in the 26 Counties the coalition government have refused to take such action and only belatedly introduced a €250 million enterprise fund in August, the German package rolled out late last year was over €300 billion.
The ESRI also have some controversial things to say about taxation and public finance. Private household consumption will fall by 7% in 2009 and 2% in 2010, while more critically investment will contract by 30% in 2009 and 15% in 2010, meaning that it will be more difficult to grow the economy out of the recession if little investment is being made in it.
In terms of living standards and income, we are back five years to 2004, though many households have debt created at the top of the boom in 2007.
Even with a €4 billion cuts package the government will still be running a spending revenue deficit in 2009 of 12.9%. Controversially the ESRI do not support tax increases, and instead propose more cutbacks including a 20% cut in child benefit, but do not propose cuts in welfare rates.
Speaking at the conference launching the ESRI report, new Central Bank Governor Patrick Honohan proposed wages cuts as a way to restore competitiveness and said that he believed “international wage competitiveness – even if it means wage cuts – is key to sustaining and growing employment”. Honohan, also claimed that the Government had a “credible” public finance strategy.
SIPTU president Jack O’Connor took a different view and has attacked the ESRI report. O’Connor said, that the ESRI was “continuing its dutiful role as a cheerleader for the government policy of imposing the entire burden of fiscal adjustment on working people and the less well-off” and that “The wealthy are insulated from any requirement to contribute at all.”

Dole queues: Over a year of economic downturn the government have failed to produce a coherent strategy to respond