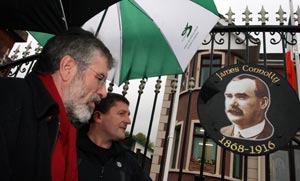 A NEW plaque bearing the image of James Connolly was unveiled at Sinn Féin’s Upper Falls constituency office, Connolly House, on Friday 9 October by party President and West Belfast MP Gerry Adams.
Andersonstown’s new Sinn Féin councillor, Caoimhín Mac Giolla Mhín, chaired the unveiling at which Gerry Adams spoke to the assembled crowd about the legacy of James Connolly and the important role Connolly House has played throughout the years in providing a service to the people of the Andersonstown area and beyond.
As the Tricolour and the Starry Plough flew in the background, Adams spoke of James Connolly’s work in Belfast where he organised workers, and especially those thousands of young women, whom he described as the linen slaves, who worked in hellish conditions in the Mills which were the backbone of Belfast’s economy at the time.
He went on to say: “I am very pleased to unveil this plaque to James Connolly, trade union activist, labour leader, republican, Falls Road citizen and Irish revolutionary.
“The vision of Connolly and his work as an internationalist and socialist has inspired generations of republican activists.”
During the course of his address Adams said that Connolly’s greatest legacy to republicans today is The Proclamation of the Republic.
He said:
“While others, most notably Pearse and Kathleen Clarke, had a hand in its writing it is the vision of Connolly which burns through its words.
“The Proclamation is a document which provides the heart and soul of Irish republicanism today. The Proclamation is about the people of Ireland. It is about self-determination and democracy. It is about change – deep rooted and fundamental change in Irish society. It is anti-sectarian – guaranteeing civil and religious liberty. And it is about equal rights and equal opportunity for all citizens. This is Sinn Féin’s mission statement for the 21st century. If anyone asks what Sinn Féin stands for, what marks us out from others, quote the Proclamation.”
Adams explained that in 1983 when choosing a name for the new headquarters of Sinn Féin in west Belfast, it was understandable that it was decided to name the building after such a great Irish leader.
Adams continued:
“Connolly House was first opened for business in 1983. In the intervening 26 years it has been at the heart of Sinn Féin’s constituency work in west Belfast.
“Those who have worked in it have braved the threats and violence of the British Army, RUC and Unionist paramilitaries.
“On one occasion several republicans were shot and wounded as they repaired damage caused by a rocket attack, while in August 1984 I was present during the RUC armed assault on peaceful demonstrators and the brutal murder of Sean Downes who was killed by a plastic bullet, fired by a member of the RUC, just a few feet from this spot.
“But none of this deterred the scores of party activists who continued to provide a first class constituency service to the people of this area.
“Connolly House also became the rallying point for marches and demonstrations.
“I remember the scenes outside this building at the announcement of the IRA cessation in August 1994 and the sense of hope and expectation that surrounded it.
“Politically, we have made considerable progress since then.
“That is evident in the huge amount of work that goes on in Connolly House.
“It is also evident in the current negotiations between ourselves, the British government and the DUP.
“In recent years the building has been extensively refurbished to make it a more pleasant office to work in but also to make it more accessible to citizens.’’
Councillor Mac Giolla Mhín concluded the unveiling by thanking the office staff for the work they do on a daily and voluntary basis and also thanked Danny, Flash, Micky, Jacqui and the office staff, and all the activists who delivered the Andersonstown cumann bulletin, for working to make the unveiling a success.

Gerry Adams with the Staff of Connolly House