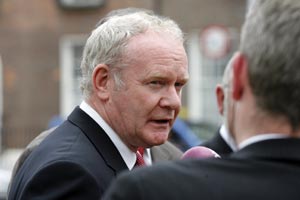 FOLLOWING receipt of written details of the financial package that the British Government will provide to support a department of justice in the Six Counties, the North’s First and Deputy First Ministers Peter Robinson of the DUP and Martin McGuinness of Sinn Féin met British Prime Minister Gordon Brown for more talks on the issue on Tuesday at Downing Street.
Speaking the same day after a meeting of the Sinn Féin Officer Board in Dublin, party President Gerry Adams said:
“Sinn Féin want to see a democratically accountable civic policing service in the North. Central to this is the transfer of powers on Policing and Justice. This was agreed at St. Andrews.
“The Sinn Féin Officer Board met in Dublin today to decide on a formal party response to the financial package put forward by the British Government to enable the transfer.
“Our approach to this negotiation has been twofold. On one hand to secure an adequate financial package for a quality frontline, civic policing service and a fair and effective justice system; and, on the other, ensuring that existing budgets for health, education and the other departments would not be affected by transfer.
“Yesterday we received from the British Government in writing the details of the financial package being proposed. The party Chief Negotiator Martin McGuinness recommended to the Officer Board that we proceed on the basis of this financial package.
“The Officer Board today accepted this recommendation and Martin McGuinness will inform the British Government of this in discussions in London this evening.
“The process to transfer powers should now be completed quickly.”
Speaking after the Downing Street meeting Martin McGuinness said: “The issue of funding has now been conclusively dealt with in my view and I think it’s now a matter of urgency that we move – and with all speed – to ensure that the transfer of power over Policing and Justice takes place.

CLINTON SUPPORTS SPEEDY TRANSFER
Meanwhile US Secretary of State Hillary Clinton made clear during an address to the North’s Assembly on Monday that she hopes to see the speedy transfer of policing and justice powers to the Northern Executive.
Clinton led a large US entourage to the North that included senior officials, leading US business people and her special economic envoy to the North, Declan Kelly, for political, business and social events at Stormont, Queen’s University and Belfast City Hall.
It is widely anticipated that the transfer of policing and justice powers may lead to a US investment dividend.
During her visit Clinton met senior Sinn Féin and DUP political delegations led respectively by Peter Robinson and Martin McGuinness and Sinn Féin president Gerry Adams, and then met the First Minister and Deputy First Minister together.
During the day the US Secretary of State spoke of how the political process was a journey that was not yet over. “I am here to send a strong message that the Obama administration is committed to supporting you as you continue your journey,” she said outside Stormont Castle.
Martin McGuinness said this was a time for “facing up to the challenges that clearly face us”.
Clinton then addressed a packed Assembly chamber at Parliament Buildings.
“Now, we know what it means to be supportive and we also know what it means to meddle,” she said in carefully crafted comments.
“And I want to be clear that when it comes to the important issue of devolution, of policing and justice, that is a decision for this Assembly to make,” she added.
“But as a true friend, my hope is that you will achieve what you have set out to do, to complete the process of devolution.”
She encouraged politicians to move forward and pledged that “the United States will be behind you all the way, as you work toward peace and stability that lasts.”
The only controversial note came at the end of Clinton’s Assembly speech when DUP MLAs Gregory Campbell and the Rev William McCrea, who are widely seen not to embrace the power sharing and all-Ireland political arrangements, left the chamber as she was being accorded a standing ovation.

‘No one can be left behind’
Speaking on the eve of the Clinton visit Sinn Féin President Gerry Adams said:
“Nationalist areas, especially in Belfast and west of the Bann, continue to suffer from higher than average levels of unemployment and disadvantage, resulting often in significantly greater levels of sickness and premature deaths. Structured political, religious and economic discrimination is still a major factor in creating and perpetuating inequality.
“While some progress has been made the recent report by the Independent Review of Economic Policy into InvestNI is a damning indictment of that agency and its lack of strategic vision.
“The fact is that between 1998 and 2007 Invest NI (and before it the IDB) failed to invest in jobs west of the Bann, and in the north west, as well as in west Belfast. These areas lagged well behind South Belfast for actual jobs promoted.
“This is unacceptable and symptomatic of the inequalities that lie at the heart of this state.
“If the peace process is to mean anything it must deliver sustainable economic development which tackles the deep- rooted inequalities and discrimination that still exists.
“It must deliver for communities, including deprived unionist working class estates, which are oppressed by multiple deprivations.
“These areas have to materially benefit from the change that is taking place. That means that inward investment from the USA and elsewhere has to contribute positively to an inclusive future. It must be directed into areas which have been excluded for generations from investment.
“Our responsibility has political leaders is to structure policy and practice in a way that ensures opportunity and access for all. No one can be left behind in this process.”