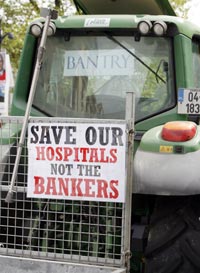 UNITY CALL: Voices from across the political spectrum must defend public hospitals against centralisation and cutbacks

SINN FÉIN Dáil leader and Health spokesperson Caoimhghín Ó Caoláin TD has called for unity across the political spectrum and among healthcare providers to defend the network of public hospitals against centralisation and cutbacks. Deputy Ó Caoláin was speaking after a visit to South Tipperary General Hospital in Clonmel on Tuesday.
Deputy Ó Caoláin met with Hospital General Manager Carole Broadbank, Director of Nursing, Robert Quinn and Consultant Peadiatricia, Dr Shan’a and was given a tour of the hospital. Also present were Cllr Seamus Healy and Kevin Brunnick (Cahir) of the Save Our Hospital Committee.
Having been given a tour of the hospital, Deputy Ó Caoláin described it as “a centre of excellence”. He said:
“Hospitals across the state continue to be under threat from the centralisation policy of the Fianna Fáil/Green Party Government, including excellent hospitals such as South Tipperary General at Clonmel.
“The removal of services from Monaghan General Hospital, culminating in the ending of acute services on 22 July last, has been used as a template for the downgrading of other hospitals such as Nenagh, Ennis and Dundalk. Government and HSE centralisation policy, as well as the tightening regime of cutbacks, including the recruitment embargo, sees hospitals such as Clonmel under threat.
“On my visit to this hospital I met with management and staff and heard their concerns for the future of what is a centre of excellence. I made a firm commitment on behalf of Sinn Féin to the retention of services at local hospitals and opposition to centralisation policy and to current and further proposed cutbacks.
“It is essential that voices across the political spectrum make the same pledge and that local campaigners and healthcare providers continue in a united way in support of their hospital.”

FAMILY RESOURCE CENTRES
Following his hospital visit, Deputy Ó Caoláin visited Spafield Family Resource Centre, Cashel, where he met Sr Mary Walsh and Mary Myers (Spafield FRC) and Claire Cashman and Sr Patricia Wall (Millenium FRC). They discussed the threat to the funding for Family Resource Centres if the proposals in the McCarthy Report (‘Bord Snip Nua’) are implemented.
“The communities we serve are the most vulnerable and the most at risk,” said Claire Cashman. Deputy Ó Caoláin commended the excellent work being done by the centres. Deputy Ó Caoláin said:
“Family Resource Centres are providing excellent services in areas where they are most needed, including here in South Tipperary. The fine centre at Spafield is currently being expanded and is a credit to all who work there. Individuals and families, especially women and children, are being given a new lease of life.
“Colm McCarthy’s report proposes the axing of the Family Support Agency which funds Family Resource Centres to the tune of €18 million. If this funding is cut it will threaten the future of 107 Family Resource Centres across all 26 Counties in this state.
“These centres provide invaluable services and supports to families and communities including education and training, assistance for those suffering domestic violence and addiction issues. Childcare services are also provided, supplementing our very inadequate childcare infrastructure.
“It is the least-well-off families and communities who benefit most from the Family Resource Centres and have the greatest need for their services. These are the very people who are suffering most in the recession and will suffer from proposed cutbacks. To allow these centres to be targeted for cuts would be scandalous.
“The Government should absolutely refuse to cut funding for the Family Resource Centres. In fact, it should be enhancing their work and facilitating the establishment of more centres. Sinn Féin in the Oireachtas and across the state will oppose cuts to these centres and hold the Government fully to account on this vital issue.”