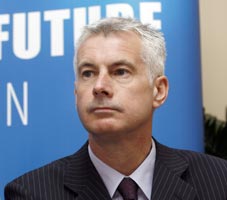 ‘Think before you drink’

ONE of Ireland’s largest local authorities, South Dublin County Council, has almost unanimously endorsed a Sinn Féin motion calling for a boycott of all Coca-Cola products during a dispute over the global drinks giant’s sacking of 130 workers here in Ireland and the multinational’s rejection of a Labour Court recommendation on redundancy or re-employment terms.
The motion also urges all businesses in the South Dublin County Council region to refrain from buying or stocking Coca-Cola products until the dispute is settled.
A similar motion has already been passed by Tuam Town Council in Galway and local shops are backing the action.
A bid by Sinn Féin members of Dublin City Council last week to build on that solidarity with Coca-Cola workers fell, however, due to lack of support from Fine Gael.

130 JOBS ‘OUT-SOURCED’
Members of SIPTU at Coca-Cola HBC Ireland have been on strike against the out-sourcing of 130 jobs at five distribution locations since the end of August.
The successful motion at South Dublin County Council was moved by Sinn Féin Councillor Seán Crowe (Tallaght Central) as Coca-Cola strikers looked on from the public gallery.
In June, workers were given a “choice” by management: accept a reduction in terms and conditions amounting to up to 40% or be transferred to a third-party provider on similarly reduced terms. A first “welcome message” from the employer-to-be already announced upcoming redundancies.
The motion read:
“That this council calls for a boycott of all Coca-Cola products in response to this highly-profitable company’s laying off of 130 workers here in Ireland and Coca-Cola’s rejection of the Labour Court recommendations regarding the redundancy package or the re-employing of the workers.
“This council further urges all businesses in the South Dublin County Council region to refrain from buying or stocking Coca-Cola products until the dispute is settled.”
Putting the motion forward, Seán Crowe said:
“Faced with the denial of good faith negotiations and the obviously inferior conditions at the third-party providers, SIPTU served strike notice on 20 August. Despite having filed legal notice of an industrial conflict, the workers were sacked while on the picket lines on 8 September.
“Even during the economic crisis, Coca-Cola recorded €425 million profits and dividends were increased by 12% in 2008. The company has made more than €200 million profit in Ireland in the first half of 2009.”

CROSS-PARTY SUPPORT
Appealing for cross-party support, Tallaght Councillor Crowe paraphrased retired union convenor for the Coca-Cola staff, Paddy Cahill, at last week’s SIPTU delegate conference, saying:
“Coca-Cola claim to be the real thing but we ask you to do the right thing.
“Boycott Coca-Cola until its sacked Irish workers get a real deal.”
The South Dublin County Council Manager has now undertaken to see what practical measures can be taken in light of the motion and Coca-Cola HBC will be officially written to, notifying them of the council’s concern.
Councillor Crowe said that staff previously had good relations with the company but new management seems intent on riding roughshod over workers’ rights.
“The workers at Coca-Cola have gone through the proper industrial relations machinery,” Seán Crowe said, “but the company just doesn’t care and the Government does nothing about it.
“I hope that everyone – whether they are in a trade union or not – supports these sacked workers by boycotting Coca-Cola until there is a satisfactory solution.
“Think before you drink.”