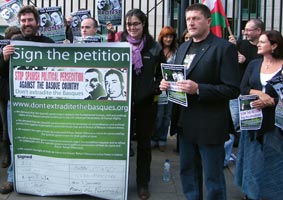 THE Don’t Extradite the Basques Campaign has welcomed the display of public support for the two Basque men fighting extradition from Belfast to Spain as Arturo Beñat Villanueva’s hearing began in the High Court on Monday, 5 October.
Villanueva is accused of being a member of Basque pro-independence youth organisation Jarrai from 1994-2000. However, the youth movement was not criminalised until 2005 and it was declared ‘terrorist’ in 2007. During the hearing the defence also argued that there was a total lack of specification of actual offences committed by Villanueva in the Spanish authorities’ arrest warrant
Supporters demonstrated outside the court on Monday and heard from Andersonstown Sinn Féin representative and newly co-opted Belfast City Councillor Caoimhín Mac Giolla Mhín, who has been involved in solidarity work with the Basque Country for many years.
Speaking at the event, Mac Giolla Mhín said: “The Spanish government is intensifying its campaign of criminalisation against a wide range of peaceful political, cultural and youth organisations that support independence for the Basque Country.
“We can see the impact of this campaign here in Belfast, where the Spanish authorities are pursuing Iñaki de Juana and Arturo Beñat Villanueva solely for their political ideas and not for any criminal activity.
“Sinn Féin support the petition against the extradition attempts. We demand that the Spanish government respects the fundamental human, civil and political rights of the Basque people as laid out in the UN Declaration of Human Rights and that it ends its campaign of criminalisation against the Basque pro-independence movement.
“We support the human right of Iñaki and Beñat not to be persecuted by the Spanish government for their political opinions.
“We call on the British government to immediately reject the extradition requests and to refuse to collaborate with the Spanish government in this political persecution.
“And we fully support the right of Iñaki de Juana and Arturo Beñat Villanueva to live freely in Ireland.”
The Campaign has also welcomed comments from Sinn Féin MEP Bairbre de Brún, who said on Monday that attempts by the Spanish government to extradite two members of the Basque community from Ireland should be abandoned and that the men should be free to live their lives in Ireland.
De Brún said: “The two men are essentially being pursued solely for their political ideas and the extradition attempts are purely political on behalf of the Spanish authorities and this needs to be challenged and rejected.”
The Campaign is calling another protest for when Iñaki de Juana’s hearing begins in November.
An Phoblacht
44 Parnell Sq.
Dublin 1
Ireland