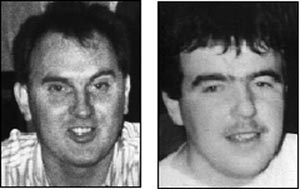 The failure to hold an inquest into the killing of two unarmed IRA Volunteers by the SAS in October 1990 can be challenged, a Belfast court has ruled. Judge Weatherup granted permission to relatives of the two men to seek a judicial review due to the “undeniable inordinate delay” in holding an inquest into the deaths.
Dessie Grew (37) and Martin McCaughey (23) were shot dead close to farm buildings in Lislasley outside Loughgall, County Armagh. Their deaths were part of a series of shootings which led to allegations of a shoot-to-kill policy of ambush and summary execution carried out by British and British trained forces.
The families argued that the failure to hold a prompt inquest contravenes their rights under European legislation. The families have expressed fears that the longest outstanding inquest will be subject to further delay because the latest probe into the killings being conducted by the PSNI’s Historical Enquiries Team may not be concluded until the end of 2010. Judge Weatherup said he would wait for the coroner to decide next month whether to allow a further delay at the behest of the HET.
Lawyers acting for the families have also called for a tribunal on the grounds that Britain’s shoot-to-kill policy was in breach of European Right to Life provisions. The Human Rights Act incorporated European Human Rights legislation into Britain’s domestic law in 2000. But as an original signatory the British government ratified the European Convention on Human Rights almost 50 years earlier.
Addressing the preliminary hearing, solicitor Fearghal Shiels of Madden and Finucane said the families believed the British state had “clearly breached its legal obligations to conduct an effective official investigation into the deaths.
“The RUC officers who investigated the killings lacked the requisite degree of independence from the undercover soldiers involved in the shooting,” said Shiels.
“No attempt was made to seriously challenge the excessive force used, involving the firing of at least 72 rounds and in circumstances where one of the men was shot twice on the ground as he was dying or already dead,” said Shiels.
In a recent House of Lords ruling the British have sought to thwart any move towards the establishment of an independent investigation into contentious shoot-to-kill deaths on the grounds that European legislation could not be applied retrospectively. However a recent European Court of Human Rights ruling on a similar case in Slovenia has created the opportunity for the British ruling to be further challenged.
It would be shameful, if the incorporation of European Human Rights legislation into Britain’s domestic law was simply used as a mechanism to enable British courts to shield the British state by restricting citizens within its jurisdiction access to its provisions and protections. Barrister Karen Quinlivan said the families would be appealing Judge Weatherup’s decision to endorse the House of Lords ruling.