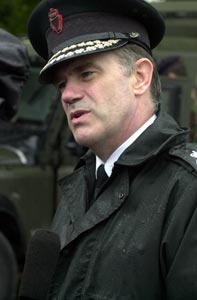 The inquiry into the death of Robert Hamill, the Portadown Catholic beaten to death by a sectarian mob while an armed RUC patrol failed to intervene, heard evidence regarding the attitude of former RUC Chief Ronnie Flanagan to the killing.
Robert Hamill died of brain damage sustained after being kicked unconscious by loyalists in April 1997. At the time the RUC repeatedly lied about the circumstances of the incident to the media. One of the RUC officers at the scene was later implicated in the apparent tipping off of a loyalist suspect.
The inquiry heard evidence from Anthony Langdon, a former NIO civil servant, who had prepared a briefing report on the Hamill case for the then Secretary of State Peter Mandelson.
The Englishman had been brought into the NIO after Chris Patten had raised a number of serious concerns during his investigation into policing in the North.
In the memo Langdon recalled a comment by Flanagan which attempted to deflect responsibility away from the loyalist mob and blame members of Hamill’s own family for his death. Langdon recorded Flanagan commenting that Hamill’s death “could well have been caused by his own family cradling his head in a way that led to oxygen starvation”.
Flanagan had also falsely claimed that Robert Hamill was “sitting up in bed and talking to his friends and family” when in reality he never regained consciousness after the beating. Flanagan had claimed Hamill had been well on the way to recovery before his sudden death in hospital, suggesting the death could be attributed to the medical care he received rather than the beating. Flanagan later retracted this but Langdon inferred the Chief Constable’s attitude reflected the RUC’s treatment of the case.
Appearing at the Belfast hearing, Langdon recalled in his notes that Flanagan had claimed the fact that Robert’s sister rather than his partner had spearheaded the campaign for justice that followed Hamill’s death was significant. Flanagan claimed Diane Hamill “had her own agenda to discredit the RUC”.
The inquiry heard that Flanagan’s appraisal of Diane Hamill had not been shared by the police complaints body who described her as “impressive” and deserving public recognition.
Ronnie Flanagan is currently the British Home Office’s Chief Inspector of Constabulary. In his capacity as the British Home Secretary’s senior professional advisor on policing, Flanagan recently completed an “Independent (sic) Review on Policing” for the British government.

POLICE COMPLAINTS BODY INEFFECTIVE
The body tasked with investigating allegations of negligence and collusion in the wake of the killing of Robert Hamill was “ineffective” and “lacked moral fibre”, the inquiry was told.
Appearing at the inquiry, Paul Donnelly, who was head of the Independent Commission for Police Complaints at the time of the Hamill murder, delivered a damning indictment of his former organisation.
Far from holding the RUC to account, Donnelly described the ICCP as “deferential to the point of being sycophantic” while the “collective sentiment was one of passivity,” said Donnelly.
Donnelly recalled a comment by a NIO official who described the role of the ICCP as there to help the police. Donnelly corrected the official pointing out that the ICCP was there to help policing which was an entirely different context.
“My impression is many of my colleagues thought they were there to help the police,” said Donnelly. The ICCP was replaced by the Police Ombudsman following recommendations in the Patten Report.