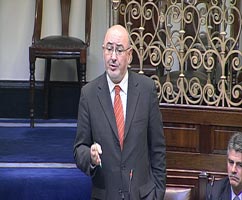 There were bruising battles between the Yes and No sides in the final week of the Lisbon Treaty referendum campaign. The debate was entering its final 24 hours as An Phoblacht went to press and while last weekend’s polls had the Yes side ahead, the volume of people making their minds up at the last minute and the widespread anger at the Government indicates a close contest with No campaigners believing they can secure a second rejection of the Treaty.
Sinn Féin launched a series of hard-hitting advertisements (see page 20) in the national media for the final week calling on people to vote  No to another bad deal. Speaking in Dublin Sinn Féin President Gerry Adams said the people were being asked to vote on the same treaty, by the same government and they should be given the same answer. “Fianna Fáil has got it wrong on NAMA, they have got it wrong on Bord Snip and they have got it wrong on Lisbon as well. And their handling of the controversy over former FÁS chief Rody Molloy shows just how out of touch they are,” said Adams and continued:
“The Lisbon Treaty is Fianna Fáil’s Treaty. The Lisbon Treaty contains the same failed right-wing policies that brought the economy into recession.
“The key question for voters is if Fianna Fáil have got is so wrong on NAMA and on Born Snip Nua how can anyone trust them on Lisbon?
“As the party who have presided over the loss of 200,000 jobs in 12 months how can Fianna Fáil’s claims that supporting Lisbon will bring jobs and economic recovery be taken seriously?
Earlier Adams accused the Labour Party leadership of trying to be all things to all people. He said that one minute they were “attacking the government and the next they are lining up behind Brian Cowen and Brian Lenihan in their rush to be Europe’s yes men in Ireland. They can’t have it both ways.”
“Unlike Labour, Sinn Féin does not trust a government which bails out bankers and developers and their other friends in high places, a government of dig outs, backhanders and sweetheart deals, NAMA and An Bord Snip.”

Pat Cox’s Brass Neck
Sinn Féin Dáil leader Caoimhghín Ó Caoláin TD described as “outlandish and insulting” the attempts by Pat Cox to compare the Good Friday Agreement and the Lisbon Treaty and to castigate Sinn Féin for not supporting the latter. Noting that Cox made his remarks in the Border County of Monaghan and that he had no role in the Peace Process, Deputy Ó Caoláin said Cox “deserves the Brass Neck of Europe Award”.
Deputy Ó Caoláin said:
“Pat Cox attempts a ludicrous comparison between the Good Friday Agreement and the Lisbon Treaty, stating that the so-called guarantees obtained by the Irish government have been lodged with the UN in the same way as the Good Friday Agreement.
“We are not voting on the so-called guarantees, we are voting on the actual content of the Lisbon Treaty, not one comma of which has been changed, as Pat Cox well knows.
“Pat Cox played no role in the negotiation of the Good Friday Agreement. I did. I was also deeply involved in the debates within Sinn Féin afterwards and I know that the Agreement was proposed and supported on the basis of what it contained and the potential it had to make peaceful political progress possible. It was and is dependent on the political will of both Governments and all parties to implement it. The lodging of the Agreement with the UN had little to do with how it was ‘sold’.
“The issue is not the manner in which the so-called guarantees on Lisbon will come into effect by being lodged with the UN. The issue is that they do not alter the content of the Lisbon Treaty.
“Pat Cox deserves the Brass Neck of Europe Award for his brazen attempt to use the Peace Process and the Good Friday Agreement to promote his arguments for the Lisbon Treaty.”
Gerry Adams made a more valid comparison than that of Pat Cox when he said that during the early days of the Peace Process the Irish people were told that the Downing Street Declaration was the only deal possible. But Sinn Féin kept negotiating:
“Just as a better deal was possible in the Peace Process, a better deal is possible in Europe. A deal based on democracy, equality and prosperity. A deal that replaces the outdated and discredited Lisbon Treaty with a new deal for the new and challenging times in which we find ourselves.

American Chamber of Commerce
Reacting to the call from American Chamber of Commerce for a Yes vote Sinn Féin vice-president Mary Lou McDonald it was no surprise as Lisbon will lead to greater liberalisation of public services, international trade and energy provision and downward pressure on wages.
“The announcement by the American Chamber of Commerce stands in stark contrast to comments by Paul Rellis, Managing Director of Microsoft Ireland who, speaking to the Oireachtas sub-committee on the Future of Europe on 21 October, 2008 said, ‘I have not seen any material impact on jobs, market access or sales in recent months attributable to the rejection of the Lisbon Treaty.’
Saying No to Lisbon in 2008 had no impact whatsoever on jobs. The same will be true if we rejected the Treaty on 2 October.
“The reality is that companies will continue to invest in Ireland on the basis of economic potential. Voting No to the Lisbon Treaty poses no threat to that potential.”

Ryanair bribery
The throwing of money at the Yes campaign continued with the offer by Ryanair to fly supporters of the Lisbon Treaty into Ireland free of charge. The Europe for Ireland website offered to fly supporters of the Lisbon Treaty to Ireland free of charge with Ryanair to canvass for the Treaty, with Europe for Ireland offering to pay any additional flight taxes. Their website asks people if they are ‘Interested in traveling to Dublin to work for the Lisbon Treaty?’ and that, ‘Ryanair have offered us some free seats for people who volunteer to canvass for the Lisbon Treaty in Ireland.’ The offer also makes clear that anyone interested ‘must agree in writing to canvass for a Yes vote while in Dublin. “We will put you in touch with one of the relevant organisations in Dublin. (If you do not turn up to canvass, your return flight may be jeopardised.)”
Mary Lou McDonald said:
“The Yes side is clearly resorting to bribery in the final days of the campaign. The European Commission office in Ireland and the Department of Foreign Affairs have also spent between them €1million in ‘informing’ people about the work of the EU in the final weeks of the referendum campaign. It is estimated that the ‘Yes’ campaign will spend €10 for every €1 spent by the No side.”

Workers’ rights
At a press conference with Irish Regional Secretary of the Unite Trade Union Jimmy Kelly, Mary Lou McDonald said that the “Lisbon Treaty was a bad deal for workers and would drive down wages across the EU.” She said that the government’s non-legally binding declaration on workers’ rights was worse than useless and had as much credibility as an election promise the week before polling. McDonald said:
“Over the last few years there has been a deeply worrying trend within European Commission proposals to hollow out hard won gains on workers wages and conditions. A series of highly controversial rulings by the European Court of Justice known as the Viking, Laval, Ruffert and Luxembourg judgements have made the situation even worse.”