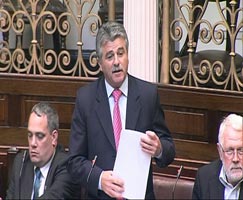 Sinn Féin Finance spokesperson Arthur Morgan TD was back in the Dáil on 23 September after his suspension the previous week when he protested at the NAMA legislation. Morgan slammed the Fianna Fáil/Green Government, saying it was lying to the people and attempting to impose a scheme that would penalise this and future generations for years to come.
Pointing out that the Government was paying far more than market value for the NAMA properties, Morgan asked:
“How can we guess the current market value in this State? There is only one piece of solid evidence on which one can rely and it relates to the Carroll-Zoe application to the High Court for protection. ACC Bank is pursuing the Carroll-Zoe group. Zoe agreed, and the judges in the High Court and the Supreme Court accepted, that in the event of a fire sale of the properties, the market value would probably be of the order of 25%.
“Why are we paying exorbitant amounts of taxpayers’ money? People have their backs to the wall, they are losing their jobs, their homes are being foreclosed on and they are threatened with losing their family homes, yet we are shoveling money from these people – low and middle income families – to support corrupt bankers. This part of our history will be looked on with significant sadness in generations to come.”
Morgan described as “obnoxious” the plan by the toxic Anglo-Irish Bank which has been taken over by the State, to proceed with the building of a new headquarters:
“According to papers lodged with the High Court and the Supreme Court, Anglo Irish Bank submitted a document stating that it would continue to employ Carroll companies to build its new headquarters in south Dublin at a cost of €68 million. Some €68 million is being spent on a new headquarters for the most toxic zombie bank on the face of the earth. Why has the Government not told Anglo Irish Bank to wise up, that it will not get new palatial headquarters, that it is alright where it is for the moment and that it will not transfer €68 million to it for fine new headquarters? It is scandalous that this is being allowed to happen. That bank is under the direct control of the Government which can move to stop that nonsense.
“I compare that to Louth, Meath, Cavan and Monaghan where there is a proposal to build a regional hospital but it cannot proceed because no funding is available to build it. However, there is funding to the tune of €68 million available to build a new headquarters for Anglo Irish Bank in south Dublin.”

Greens throwing shapes
Turning to the Green Party, Morgan said:
“What is the Green Party doing? Every now and again it sends a Senator out to the plinth to throw shapes, as Christy Moore would have said, at the media and threaten what it will do with the Government and Fianna Fáil and whether the party will walk out of, or stay in, government. As soon as he finishes throwing shapes, he hurries back into the other House, as do his colleagues in this House, to vote with the Government.
“The Green Party told us it will ensure equal sharing of the risk between the bankers and the taxpayer. To me, that means 50:50 sharing of the risk but the Green Party has agreed to the taxpayer taking on 95% of the risk and the bankers taking on 5%. It is throwing some shapes. That is some equality in the sharing. Members of the Green Party are some bunch.
“This NAMA business is not some neutral enterprise that will not impact on education, health care provision and looking after our pensioners. It will impact on these because every euro spent underwriting NAMA will be a cost to the taxpayer.”

NAMA is bad for North as well

Sinn Féin West Belfast MLA Jennifer McCann, Chairperson of the Assembly Finance and Personnel Committee has said that the Irish Government’s National Assets Management Agency proposals (NAMA) will have detrimental implications for the economy across the Island of Ireland.
Sinn Féin submitted a motion to the Assembly expressing “deep concern at the possible negative economic consequences for the island of Ireland and calling on the First Minister and Deputy First Minister to raise the issue at the North South Ministerial Council “to agree a way forward regarding these assets which will ensure the economic stability of the island of Ireland and movement towards economic growth”.
Jennifer McCann said:
“NAMA is a scheme which the Irish Government has devised in order to buy ‘bad loans’ from the banks. It is the opinion of many, including Sinn Féin, that the plan from the outset is highly flawed and will place an immense economic burden on taxpayers both North and South while banks and developers walk away scot free.
“If the Irish Government is allowed to proceed with NAMA there will be profound repercussions for people living in the North as it is estimated that €4.8bn of assets are held in the North which would fall under the control of NAMA.
“Currently there is no stated timeframe for NAMA to take place. The very real danger is the possibility of NAMA having a rapid time frame and a minimal discount on the loans bought up. This could lead to a quick sale of land and properties in the North that will be included in this scheme.
“This, given the €4.8bn total would be a staggering amount of land to be placed on the market which in economic terms could see a plummeting of local prices and the free fall of the economy.
“What is urgently required is not the private reassurances given to the Finance Minster, Sammy Wilson by his Dublin counterpart Brian Lenihan but an open and full debate in an All Ireland economic summit to find alternatives to NAMA and an all-Ireland strategy towards mutual economic recovery.”