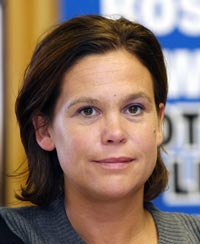 RESPONDING to claims made by Eamon Gilmore on RTÉ Radio this week that the Lisbon treaty will protect workers’ rights, Sinn Féin Vice-President Mary Lou McDonald has challenged the Labour Party leader to a public debate on the issues.
Mary Lou McDonald said:
“Eamon Gilmore’s claims regarding workers’ rights and the Lisbon Treaty are simply false.
“He argues that the treaty would protect workers through the Charter of Fundamental Rights and that the Solemn Declaration on Workers’ Rights further addressed the concerns of the electorate on these issues. He is wrong on both counts.
“Almost half – 40% – of people who rejected the Lisbon Treaty in 2008 did so because of concerns over workers’ rights. They are concerned with the anti-worker direction of both the European Commission and the European Court of Justice.
“The Lisbon Treaty, particularly through the Protocol on the Internal Market and Competition, gives further strength to the Commission and Court in their drive to force down wages and conditions.
“Under the guise of making the EU the most competitive economy in the world, they are pursuing a race to the bottom agenda in workers’ terms and conditions that are bad for individual employees and the economy overall.”
The Sinn Féin deputy leader challenged the Labour Party leader to argue his case in a public debate with her where his claims can be held up to critical scrutiny.
“If Eamon Gilmore is confident in his position he will accept the challenge in the interests of an honest and informed public debate.”

NEUTRALITY
In addition to tackling the Labour Party leader on his erroneous views on workers’ rights, the Sinn Féin vice-president accused the Government of misleading the public on the implications for Ireland’s neutrality if the Lisbon Treaty is passed.
“The Government, in an attempt to sidestep the issue, are applying a very narrow definition of neutrality,” Mary Lou McDonald said.
“Neutrality is about much more than what a country does with its troops. It is also about the alliances you are part of, the obligations created by those alliances, what you do with your resources, and what can happen in your name.”
Speaking as the Peace and Neutrality Alliance (PANA) launched its ‘No to Lisbon’ campaign, she said:
“The Lisbon Treaty has serious implications for our neutrality. Article 28 for the first time makes clear that the EU will have a common defence policy. The same article obliges member states to increase their military spending; draws us further into a military alliance; states that any future defence policy must be compatible with NATO; allows for the formation of mini military alliances; and expands the list of permissible military actions well beyond peace-keeping and humanitarian missions.
“Sinn Féin has never argued that Irish troops will be sent overseas on military missions without the consent of the Oireachtas but, if Lisbon is passed, the significant developments in the area of common defence policy contained in the treaty will further erode our neutrality.”

LISBON, SHANNON, SHELL
Killian Forde said that, as with so many other issues, the Green Party have traded long-established political principles for a place at the Cabinet table.
“Their support for Lisbon, as with their support for the use of Shannon by US troops, their support for Shell in County Mayo, and their support for savage cuts to public transport, education and health, is nothing more than pure opportunism.
“Their claim that the Lisbon Treaty will assist in the battle to stop climate change is simply untrue as the treaty gives the EU no new powers in this area. The claim is nothing more than a cynical ploy to hide the fact that their position on Lisbon, as with so many other issues, represents a U-turn of massive proportions.”