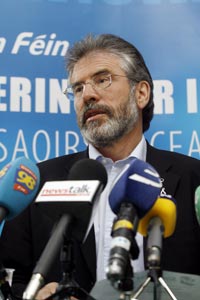 SINN FÉIN believes that Ireland’s place is at the heart of Europe but Ireland’s interests are best served by voting No to the Lisbon Treaty on 2 October, Sinn Féin President Gerry Adams said at a meeting in Dublin of the party’s Ard Chomhairle last Saturday.
“Our approach to the EU is to support those proposals that are in Ireland’s interests and to oppose and campaign to change those that are not.
“Our European agenda is positive and progressive. We are active participants in a Europeanwide movement of parties and people whose aim is to create a more democratic and people-centred European Union that promotes workers’ rights and public services, supports rural communities, and plays a constructive role on the international stage consistent with this state’s neutral status.”
In June last year, he said, the people rejected the Lisbon Treaty. They did so because they believed that is was a bad treaty and because they wanted a better deal for Ireland and Europe.
“The result presented the Irish Government with a strong mandate to negotiate a better treaty.
“At the time, we presented Brian Cowen with very detailed proposals as to how we felt the electorate’s concerns could be dealt with.
“What did the Government do? Just like their mismanagement of the economy, they prevaricated, sat on their hands and did nothing.”
As a result, Fianna Fáil and the Greens have not secured a single change to the text of the Lisbon Treaty, the Sinn Féin president said. “On 2 October, we will be voting on exactly the same treaty as we did last year. The Government’s claims of having addressed the concerns of the electorate are entirely false.”

BETTER DEAL POSSIBLE
And Gerry Adams explained why the Yes camp’s claims are lies.
“We will still lose our Commissioner, only now in 2014 instead of 2009. Our neutrality will still be undermined. Workers’ rights and public services will still come under attack. And tax harmonisation will still be made easier.
“There are four weeks left in the campaign. For our part, the fact that exactly the same treaty is being placed before the people means that we should give the same answer.
“A better deal is still possible but only if we reject the Lisbon Treaty on 2 October.”