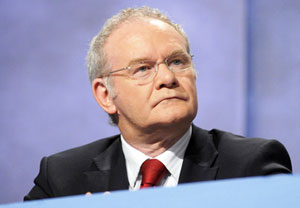 FIRST MINISTER Peter Robinson’s call for fundamental change in the way in which the Assembly in the North reaches decisions has been dismissed by Sinn Féin MP Martin McGuinness as “fantasy politics”.
The First Minister and DUP leader said safeguards ensuring cross-community support for decisions should be replaced but Martin McGuinness countered:
“Peter Robinson’s comments do not represent the Office of First and deputy First Minister.
“The people of Ireland overwhelmingly endorsed these arrangements at referendum and it is ludicrous to suggest they are in some way undemocratic. They were negotiated for because they were and are necessary.”
The Sinn Féin MP added:
“The speech made by Mr Robinson is symptomatic of the mixed messages emanating from the DUP over recent times. In my view, Peter Robinson is making the same mistakes that David Trimble made in the past.’
McGuinness said that he has previously said that Peter must not succumb to continually looking over his shoulder in fear of rejectionist Traditional Unionist Voice leader Jim Allister and those within his own party who are opposed to equality and partnership.
“The present process presents challenges for all of us, however there remains those within the DUP who have deep-rooted opposition to equality and partnership government.”

SINN FÉIN SUCCESS
Martin McGuinness said that it is not surprising that these new proposals emerge in the wake of Sinn Féin becoming the largest party following the European elections, commenting:
“The very fact that Peter’s remarks are in themselves confused and uncertain, in that he advocates a 65% vote in the Assembly yet unanimity at the Executive, goes some way in highlighting just where the DUP are currently at in relation to moving the process of delivery forward.
“Peter’s proposals appear to be some attempt to create the conditions where other parties can gang up on Sinn Féin, that will not be allowed to happen.
“The propositions expressed by the DUP leader are fantasy politics.
“The rights and safeguards secured under the Good Friday Agreement cannot and will not be changed; these safeguards are a fundamental part of the agreement and the institutions that flow directly from it and they are here to stay.
“The Good Friday Agreement requires the pursuit of an effective and substantive equality agenda. We must all collectively continue in that work in the coming term and beyond. The safeguards in place can work. The DUP must decide whether or not they want to be a partner in all of this.”