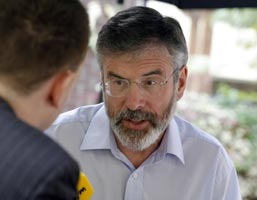 ADAMS: As a player the British Government is not, and cannot be, an objective or neutral referee

No hierarchy of victims – Adams

SINN FÉIN President Gerry Adams has accused the British Government of hypocrisy following reports that it is to seek compensation from the Libyan state for victims of IRA actions during the recent conflict in Ireland.
In a statement issued on Monday the Sinn Féin president said
“I spoke to Downing Street and to Shaun Woodward this morning on this issue. I told them there could be no hierarchy of victims.”
The west Belfast MP said that Sinn Féin would certainly support compensation for all victims. Some victims were killed directly by British agents, others by their surrogates.
He said that British state forces have also killed or injured many citizens and reminded British commentators that British Intelligence agencies have armed unionist paramilitaries, including Ulster Resistance, which was established by the DUP. The British have also collaborated with unionist paramilitaries to bring illegal shipments of arms into Ireland, he added, the most infamous of these involved the apartheid regime in South Africa.
Gerry Adams said:
“Republicans are not surprised by the hypocritical stance of successive British governments on this issue. Gordon Brown’s position is totally inconsistent but this is in keeping with London’s long-standing game playing on this important matter.
“Another example of this is to be found in Shaun Woodward’s recent dismissal of the Eames/Bradley Commission proposal for an acknowledgement payment to all victims.
“The fact is the British Government is a player in all of these issues. It is not, and cannot be, an objective or neutral referee.
“The British Government was one of the combatant forces in the conflict. Its position and Gordon Brown’s stance flows from this reality. So too does the position of some unionist leaders.”

TRIPOLI OR WHITEHALL?
Commenting in the debate about the calls for Libya to compensate victims, Relatives for Justice Director Mark Thompson said this only underlined the urgent need for a comprehensive truth commission in which victims and survivors of all aspects of political violence can have truth, accountability and reparations as a final outcome.
“The Libyan factor is only one of a series of issues to be addressed. It is complex in that evidence exists which has previously revealed that Britain’s security agencies, MI5 and RUC Special Branch, had prior knowledge of planned attacks using these weapons yet permitted these actions to go ahead in order to protect agents.
“Many of these permitted actions involved the killings of ordinary policemen, policewomen and British soldiers as well as civilians. So where does culpability morally and legally exist? Many would say with Whitehall and Downing Street.”
Mark Thompson said that, additionally, the role of the British Government Intelligence services in arming and directing loyalism, the running of scores of agents that were involved in widespread killings, and the deliberate failings of the criminal justice by providing impunity to state agents, thus facilitating policies of shoot-to-kill and collusion, must equally be examined. “The double standards and hypocrisy surrounding these issues need to finally end. Gordon Brown needs to acknowledge the role of the British Government and facilitate a truth commission.
“We need to examine the nature, causes and extent of the conflict. This can only happen via an independent and international truth commission.”

POINTING FINGERS
Relatives for Justice revealed that they have been in contact with with the Libyan Embassy in London to ensure the truth on both sides emerges.
“Whilst empathetic with those currently seeking compensation, we nevertheless expressed our hopes that any intention to pay compensation must be linked to a proper examination of all these issues through an international and independent truth commission.
“Until then, we have urged the Libyan Government to withhold any payments in the wider interests of truth and justice for all those affected by the conflict throughout the island of Ireland. And in establishing who is really culpable as the easy way out is to point the finger only at Libya.”

HYPOCRITES: Gerry Adams reminded British commentators that British Intelligence agencies have armed unionist paramilitaries, including Ulster Resistance, which was established by the DUP