Giants' walk through Ireland and Scotland 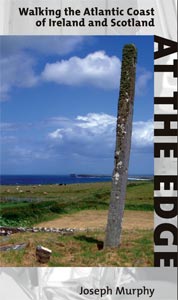 BOOK REVIEW
At the Edge: Walking the Atlantic Coast of
Ireland and Scotland
By Joseph Murphy
Sandstone Press
Price £11.99

Reviewed by
Seán Lynch
THE genre of travel books, walkers’ guides and tourist literature is large and growing. Ireland has been the subject of hundreds of such books, seemingly covering every aspect of  the country that might be of interest to visitors, from pub guides to specialist books for anglers.
At the Edge is none of these things and is rare in bringing an entirely new perspective to writing on contemporary Gaelic life. The book is a personal odyssey undertaken by the writer through the western fringes of Ireland and Scotland and describes the fragile and remarkably rich cultural heritage of the communities that live there.
What becomes clear to the reader from the very beginning of the book is that culture here is to be understood in the fullest meaning of the word. Indeed, the word ‘culture’ does not do justice to what is being explored during the three months and along the 1,500 kilometres of the walk. Joseph prefers the word dúchas, suggesting as it does the whole lived experience not only of a human community but of a natural environment.
It is in this complex and nuanced sense of an dúchas that the insight of the book lies and what makes At the Edge almost unique in its scope and appeal.
Human communities are, the writer suggests, shaped by the landscape and given their particular form almost through a melding with the physical and historical experience out of which they grow.

IMPORTANCE OF LANGUAGE
Key to the author’s argument here is the crucial importance of language. He describes the Gaelic of Ireland and Scotland as being the repository of an ancient heritage and as living evidence of the possibility of a different way of life for the small and isolated communities along the western seaboard. The language is, he explains, not only the treasury in word and song of an entire Celtic civilisation, it is in a way a standing rebuke for a society numbed into insensibilty by the onslaught of a globalised and homogenised world.
Joseph Murphy’s interest in his subject flows from his professional work – he is Senior Research Fellow in the Sustainability Research Institute at the University of Leeds – but also from his own family background: his mother is Irish and a keen student of Scottish Gaelic in the Hebrides where she now lives.
The walk is, in a sense, a personal meditation on the author’s own place in the world and there is a poignancy to it that will surely resonate with many readers, especially those from the Irish Diaspora who know something of that sense of uprootedness and loss that has characterised the Irish experience for centuries.

DEEPLY POLITICAL
At the Edge is a deeply political book. The author would agree with James Connolly that the moral and physical future of a people depends on their achieving political freedom and holding genuine political power in their own hands.
Joseph Murphy points out the inappropriateness of so many ‘big’ development projects that show no sensitivity to the needs of small indigenous communities.
Great economic plans are imposed from above without any attempt to genuinely engage with people whose lives will be changed for ever. One thinks here of the Corrib Gas Project in Mayo and the imprisonment of two protesters, as reported in An Phoblacht recently.
Joseph Murphy’s walk through Ireland and Scotland was a solitary one but he was never alone. Along the way he meets giants of Irish history like Michael Davitt, Douglas Hyde and Daniel O’Connell as well as a galaxy of great Gaelic poets. We are allowed glimpses of their writings and verse before our walker moves on to another lonely stretch of mountain road. Pausing for rest we get short references to the birds and plants that are all around and fascinating diversions into the adventures of the Fianna. The book is almost alone in giving proper place and prominence to Gaelic placenames and their meanings.
This is a serious but immensely enjoyable book. It raises some of the most important and pressing questions that face the Gaelic world, and Ireland and Scotland more generally. Irish republicans will find it an important contribution to our present challenges and our future aspirations.
An Phoblacht
44 Parnell Sq.
Dublin 1
Ireland