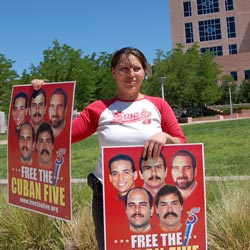 RELEASE CALL: Protests for the release of the Cuban Five

TO gain a full and clear understanding of the case of the Cuban Five and the stunning duplicity of which judicial and political elites are capable, it is necessary to recall the wisdom of that favoured sage of yesteryear, Mr George W Bush.
Speaking in the immediate aftermath of the September 11 attacks, dear departed Dubya put it very succinctly: “Any government that supports, protects or harbours terrorists is complicit in the murder of the innocent and equally guilty of terrorist crimes.”
That sentiment that would have resonated strongly with Gerardo Hernandez, Ramon Labanino, Antonio Guerrero, Fernando Gonzales and Rene Gonzales. And yet, those same words would also have set all five simultaneously wondering if they had by chance wandered onto the set of an Alice in Wonderland remake.
When Bush uttered those words, the Five were in custody in the US, having been arrested in 1998 and held in solitary confinement for 17 months. In December 2001 - three months after the attack on the Twin Towers and the Pentagon - they were sentenced to a total of four life sentences, plus 77 years.
Their crime? Infiltrating Miami’s notorious Cuban mafia and passing on details of that crazed cartel’s actual and planned terrorist activity, to the US authorities. But the only people arrested and jailed were the Five who reported the crime.
Remember this is the same crypto-political crime network responsible for the deaths of over 3,500 people in their long campaign of terror against the Cuban Revolution: from blowing a civilian airliner out of the sky in 1976 and killing 73 people, to the murder of an Italian tourist in a no warning bomb attack on a Havana hotel in 1997.
The Five had been dispatched by Cuba to gather evidence of their activities and prevent further attacks on the country. Havana had tired of Washington ignoring repeated requests  - spanning 40 years, to shut down the terrorist network.

LIFE SENTENCES
Instead, the Five were arrested and charged with being unregistered Cuban agents and conspiracy to commit espionage - the prosecution could not muster enough evidence to charge them with actual espionage, a far more serious indictment.
Gerardo Hernandez received a double life sentence. Ramon Labanino and Antonio Guerrero received life sentences without the possibility of parole, while Fernando Gonzalez and Rene Gonzalez received 19 and 15 years respectively.
Every element of the case speaks of a malign, vindictive and vengeful judicial system designed to exact retribution on the Five for all humiliations - perceived and real - visited on the United States by Cuba, over 50 years of enduring revolution.
Their trial was held in Miami despite requests to have it moved, the men have been scattered across the US in separate prisons and family visits are made all but impossible by the authorities. In July of this year Adriana Perez, the wife of Gerardo Hernandez was denied the entry visa she required to visit her husband. That was refusal number 10.
Hilary Clinton’s State Department deployed the same arguments utililised by the Condoleeza Rice State Department in opposing a visa, namely that Adriana constituted “a threat to the stability and national security of the United States.”
And on June 15 the finest legal minds in the US virtually closed off the last legal avenue of the Cuban Five when the Supreme Court refused to hear their appeal. The Five had contended that the holding of the trial in Miami made a mockery of proceedings. But the finest legal minds in the US disagreed.
No surprise that the trial of the Cuban Five is the only judicial proceeding in US history to have been singled out for condemnation by the UN Human Rights Commission, notwithstanding what the fine minds on the Supreme Court think.

INCONSISTENT SENTENCING
It is also the only US case that has attracted the support of 10 Nobel laureates, many of whom are no doubt intrigued by the strange inconsistencies to be found in the treatment of the Five and others accused of espionage and related charges.
A sample of such cases has been compiled by Ricardo Alarcon, president of the Cuban National Assembly.
There is the case of Khaled Abdel-Latif Dumeisi who was charged with acting as an unregistered agent for the government of Saddam Hussein - while the US was at war with Iraq. In 2004, he was sentenced to three years and 10 months.
Then there was Leandro Aragoncillo who worked in the White House as a military assistant to vice presidents Al Gore and then Dick Cheney. He was found guilty of passing on some 800 secret classified documents to others. His sentence? 10 years.
Or there’s Gregg Bergersen, a former Defence Department analyst found guilty of passing on ‘national defence information’ in exchange for money. He got 4 years, 9 months.
Lawrence Anthony Franklin was luckier. A former US Air Force Reserves colonel, he was found guilty of passing military secrets to a foreign government. Although sentenced to 12 years he never served a day as he was free while he appealed. And then last May the charges against him were dropped.
The Cuban Five - now jailed for 11 years - are no less than political hostages and only political and popular action can remedy this injustice. They are also exceptionally brave people deserving of widespread support, as exemplified by the remarks of Ramon Labanino just prior to receiving a life sentence: “If preventing the deaths of innocent human beings ... and preventing a senseless invasion of Cuba is the reason I am being sentenced today, then let that sentence be welcomed.”
• For more information on the Cuban Five visit www.freethefive.org