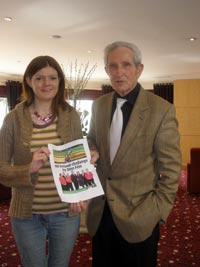 Troubles, splits and the joined-up writing

JACK PHELAN is ‘well-got’ in republican circles around Kilkenny. As a comrade of 25 years, Tom Kiernan says of him, “Jack was one of the very best.”
Born in 1924, Jack Phelan saw hard times in Ireland. He grew up in the hungry years of the 1930s and 1940s and there was also political tension in the aftermath of the Civil War in Ireland. The 1920s were, as Jack says, the years of ‘the troubles’ and ‘the split’: terms that have haunted the Republican Movement over the almost nine decades that Jack has given to the struggle. Jack chats with ELLA O’DWYER.