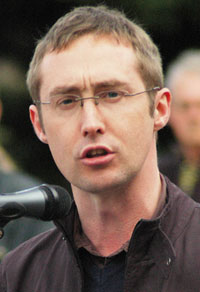 When is a fact not a fact?

WHEN is a fact not a fact? When it’s in a European Movement Fact Sheet.
The European Movement was founded in the 1940s. Its aim is to “contribute to the establishment of a united, federal Europe founded on the respect for basic human rights, peace principles, democratic principles of liberty and solidarity and citizens’ participation”.
Earlier this month, the European Movement Ireland published 20 ‘Fact Sheets’ on the Lisbon Treaty. They claimed that their intention is “to make sure that the real facts get through, above the shouting matches and finger pointing, so we can make our decision based on what it is in the document”.
In an attempt to present themselves as independent they promised that they would “not tell anyone which way to vote”. However, they are far from independent.
In 2005, the European Movement Ireland received a grant from the Department of Foreign Affairs of €260,335. In 2006, the bulk of their €348,681 budget came again from the Department of Foreign Affairs.
During the last Lisbon Treaty referendum, the European Movement’s then chairperson, Labour Party TD Ruairí Quinn, was ‘seconded’ to the pro-Lisbon Alliance for Europe campaign group. Their current chairperson is Maurice Pratt, a director with IBEC.
More interestingly, their executive director is the former Labour Party press officer and Department of Foreign Affairs official Andrea Pappin.
Pappin also double jobs as a special adviser to Margot Wallström, vice-president of European Commission.
As a recipient of state funding, the European Movement are barred from officially supporting Lisbon. However, their Fact-Lite Fact Sheets are clearly an attempt to sway the voters in support of the treaty.
Take the issue of the Commissioner. The European Movement Fact Sheet says: “Under Lisbon rules, we will keep our Commissioner. Without Lisbon we’ll lose it.”
Neither of these claims is true. If Lisbon is ratified the proposal to reduce the Commission from 27 members to 18 will remain in place. The European Council has agreed that if Lisbon is ratified, every member state will have a place in the incoming Commission. However, in the opinion of this writer, the Council’s agreement will only last for the next five years and the Lisbon formulae will be implemented in 2014.
If Lisbon falls, then the Nice Treaty rules apply. Under Nice the Commission must be reduced when the EU reaches 27 member states, which it now has. The way in which this should happen is left to a unanimous decision by the Council of Ministers. If Lisbon is rejected in October, Ireland can only lose its Commissioner if the Irish Government agrees to it.
On workers’ rights, the European Movement Fact Sheet says:
“The EU has largely improved workers’ rights in Ireland since the moment we joined, such as equal pay and maternity rights. The issues we have with workers’ rights have to be resolved nationally and are nothing to do with the Lisbon Treaty.”
While the first claim is partly true the second is false.
The current direction of EU policy and European Court of Justice case law is actively undermining workers’ rights and collective bargaining across the EU. The Lisbon Treaty Protocol on the Internal Market and Competition will further strengthen the hand of the Commission and employers in their drive to increase ‘competitiveness’ by lowering wages and undermining workers’ terms and conditions.
These are just two of the many factually inaccurate facts offered by the European Movement Fact Sheets aimed at helping you, the voter, make an ‘informed’ decision on the Lisbon Treaty.
For the pro-Lisbon Department of Foreign Affairs, this is clearly money well spent, irrespective of the fact that it is an abuse of taxpayers’ hard-earned cash.