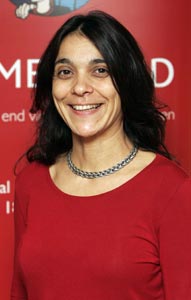 WOMEN’S AID provides support and information to women suffering abuse from their partners in their homes. While Women’s Aid recognises that men too are victims of domestic violence, as a feminist organisation it is committed to dealing with women victims and the feminist backdrop is evident in Women’s Aid’s non-directional approach to self-re-empowerment. Control and fear are two ingredients central to domestic violence, which hits all tiers of society. Nor does it recognise ethnic or religious boundaries.
As part of Women’s Aid Dublin Awareness Campaign, Policy and Research Manager MONICA MAZZONE (pictured) talks to ELLA O’DWYER about their role in combating domestic violence against women.

DOMESTIC violence varies from the physical to the emotional and can include being beaten, sexually abused, deprived of money and generally demeaned as a person. The abuse often involves death threats to the woman or to the children, intimidating behaviour such as punching walls and doors, or denigrating the woman through words and deeds to the point of not even addressing her by her own name.
One in five women in Ireland are victims of this abuse and Women’s Aid was set up to lend support to these women, as Monica Mazzone explains.
“Women’s Aid was established in Ireland 30 years ago initially to provide safe accommodation for women suffering from domestic violence. Now the refuge houses are run by the Health Service Executive and our organisation has taken on other roles such as running a telephone helpline and a court accompaniment service.
“The helpline enables women to make initial contact, allowing us to listen to her issues and inform her of all the services available to her. Women may have to go to court to have a safety order or a barring order against her partner put in place and we will accompany her.
“We can also arrange one-to-one meetings with victims in any of our six locations around the city to listen to them, provide information on services available to them, and generally help them decide what way to go forward.
“We never tell the woman what she should do. The woman needs to take control herself given that, for too long, she will have been denied a say over her own life and affairs. She needs to be allowed to gradually take back that control.”
This non-directional approach to helping abused women is very much to the core of Women’s Aid’s ethos, even in the case of potentially life-threatening situations.
“Even if we’re 90% sure the woman is in danger we still won’t call the gardaí against the woman’s wishes. We would only do so after checking with her that it was okay to do so. The woman will know best how her partner would react if they were called. She’ll also know how long it would take the gardaí to get there and how dangerous the situation is.
“She will always be best placed to assess the danger and risks so we let her decide. We work with her rather than making the decision for her.”
The Dublin-based Women’s Aid facility welcomes contact from outside of the capital.
“Although Women’s Aid is located in Dublin, anyone throughout the 26 Counties can avail of the helpline and we will refer them to services locally. There is a separate organisation dealing with domestic violence in the North.
The Dublin Awareness Campaign is designed to let women know what we can offer by way of help and we’ve ran a substantial publicity campaign to inform people about the campaign.”
Women’s Aid operates with a mixture of paid and volunteer staff and is 65% funded by the Government. The remainder is secured through fundraising and the Women’s Aid (WA) charity shops throughout the city.”
Monica believes men who chose to be violent to women tend to have issues with control.
“It’s an abuse of power and control based on traditional values like male authority where men believe they have a right to domestic services.  The violence can often be perpetuated by sexual jealousy. People sometimes have the preconception that alcohol or drug abuse is the root of such violent behaviour. That’s not the case though it can make the violence worse.”
But there could be risks for the Women’s Aid workers and they are very conscious of that factor.
“We’re very aware of the possible risks and are particularly careful about our volunteer workers. We never visit the abused women in their homes so we avoid contact with the aggressor.
“We’re also vigilant when it comes to accompanying the women to court on the occasions when the man might be there. But then the gardaí will be present so that helps.”
The organisation also protects its staff from the psychological impact of working in such an emotionally-charged field.
“We have a support system in place for the staff to help prevent them from taking the work home with them because the whole thing can be fairly harrowing at times.”
Most people will ask the simple question, ‘Why doesn’t the abused woman just get up and leave?’ There are different reasons why.
Where will she and her children go without alternative accommodation and finance? The man may threaten to kill her and the children if they leave. And, more subtly, the ongoing abuse will have shattered the woman’s self-esteem to the point that she lacks the strength, confidence and basic energy to make the move.
Fear is a consequence of violence and fear is one of the most disabling of emotions.
Women’s Aid workers provide the necessary supports and encouragement that helps many women take the first steps towards overcoming the fear and oppression involved.
Power, control and fear combine to make a potentially deadly package in the wrong circumstances, as in the case of domestic violence. But it is possible to recover from the ordeal and to move away from it forever. “We see many successes where women do manage to move away from the man and the violence, going on to live happy lives. That is one of the most encouraging aspects of the job for me, seeing that kind of progress. I don’t think abused women forget but they certainly can recover.”
Women’s Aid Freephone Helpline 1800 341 900, seven days a week 10am to 10pm. Website: www.womensaid.ie

BRINGING IT HOME: Women’s Aid protest outside Leinster House highlighting that one in every five women will experience violence in their relationship