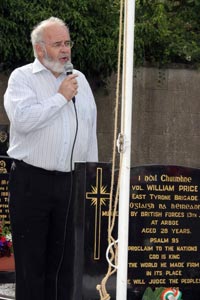 THE 25th anniversary of the death of IRA Volunteer William (Willie) Price was marked by a parade and commemoration ceremony at Brocagh, County Tyrone on 12 July last. The commemoration was organised by Coalisland/Clonoe Ex-prisoner Association.
Willie Price was shot dead by undercover British troops in the early hours of Friday, 13 July 1984.
His funeral, at which mourners were viciously attacked by the RUC, marked the beginning of what was to become a deliberate policy to disrupt republican funerals.
The main speaker at the commemoration in Brocagh was Sinn Féin MLA Francie Molloy.
An Phoblacht
44 Parnell Sq.
Dublin 1
Ireland