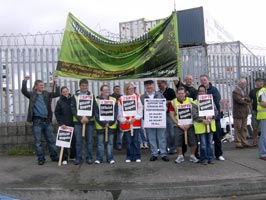 Dockers, families and locals protest at jobs and pay cuts

FOUR HUNDRED dockers, families and local people from both sides of the River Liffey marched through Dublin’s Docklands on Monday morning in support of workers striking over jobs and pay cuts at the British-owned Marine Terminals Ltd in the south port.
Dublin Sinn Féin supported the march and many members swelled the ranks backing the dockers.
Nineteen SIPTU union members at Marine Terminals were made redundant earlier this year when new management brought  in contract workers from Britain and – at the same time – demanded that remaining workers sign new contracts agreeing to pay cuts of between 14% and 18% or be laid off.
Talks aimed at resolving the dispute broke down when the company pulled out of talks at the Labour Relations Commission.
SIPTU has accused the company of importing ex-paratroopers from the British Army under the guise of security to intimidate workers.
SIPTU official Oliver McDonagh said the new management is now seeking 37 redundancies, offering a severance package of just two weeks’ pay per year of service in addition to statutory entitlements. The last redundancy programme at the terminal had seen workers get six weeks’ pay plus statutory entitlements.