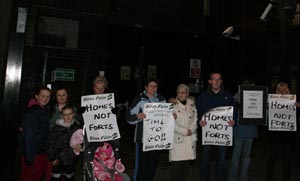 THE decision by the Policing Board to close Mountpottinger PSNI barracks as one of the 26 police stations surplus to requirements across the North has been hailed by east Belfast Sinn Féin representative Niall Ó Donnghaile as a victory for the vigorous campaign by the Short Strand community, supported by Sinn Féin.
The Mountpottinger barracks only functions on a part-time basis and costs around £180,000 a year to keep open. In addition, in the year between July 2007 and July 2008, it was used by only 16 members of the public – less than one every three weeks.
Niall Ó Donnghaile said:
“This barracks is clearly a drain on the PSNI’s resources, resources which could be better used in tackling crime in the east Belfast area.”
He pointed out that the PSNI’s own consultation on the future of the barracks received 907 submissions calling for the removal of this barracks as opposed to four submissions calling for its retention.
“For those who live in the immediate vicinity of this barracks – almost a thousand of whom signed a petition calling for its removal – the Mountpottinger barracks is a symbol of all what was wrong with policing in the North of Ireland.
“From the 1970s when Albert ‘Ginger’ Baker admitted that he was supplied weapons by the desk sergeant at the barracks to kill local nationalists for the UDA, right up to the siege of the area in 2002 when the PSNI stood by while the area came under loyalist attack.”
He added:
“This decision is a victory for the Short Strand community. It could not have been achieved without the hard work and support of the local community.”
The Sinn Féin representative cautioned, however, that much remains to be done “and we must now ensure that the local community benefit fully from this closure”.
He said that this means that the money which was being wasted on maintaining this barracks must be diverted into frontline policing services to deliver an up-to-date and effective policing service for local communities in east Belfast.
“I call upon the Department of Social Development to earmark the barracks site as a potential area for social and community development to ensure maximum benefit for the people of this area.”