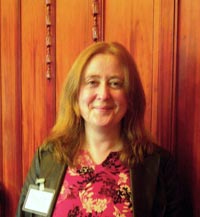 “THERE are no quick fixes”, the scale of the unemployment problem in Ireland is “massive”, it is at a level “we have never seen before”, the challenge is “serious” and “everybody needs to roll their sleeves up”.
Coming away from an interview with Bríd O’Brien, Head of Policy and Media at the Irish National Organisation of the Unemployed (INOU), leaves you bewildered, feeling at best uncomfortable but more likely shell-shocked at the sheer scale of the unemployment problem in Ireland as joblessness soars past the 400,000 mark. But you also come away convinced there is a way out of this mess if, as she proposes, “we start engaging with people at all levels” and build “a real partnership process”.
With over 16 years in the community sector representing the economically and socially marginalised, those forgotten and overlooked in boom times and recession, Bríd O’Brien is well equipped for the challenge of tackling systemic unemployment that will, according to the most conservative economic forecasts, be in double digits throughout most of 2010 and 2011.
Before working in Pavee Point, the Dublin-based Travellers’ rights organisation, for 14 years, O’Brien had spent just over two years at the Department of Finance, followed by a stint at Goodbody stockbrokers before her full immersion in the community sector.
Having worked in such a wide cross-section of the economy, public to private to community sector, O’Brien is convinced of the need to have a much greater social policy perspective when it comes to formulating strategies to tackle unemployment in Ireland today.
In her two-and-a-half years at the INOU, O’Brien has seen the economy move from a period of “so-called full employment”, where “people with disabilities, Travellers, the urban and rural disadvantaged and lone parents” were all ignored and overlooked by the Celtic Tiger economy.
The Government and wider society got comfortable with a live register jobless rate of 150,000 to 160,000 people, but now the “scale of unemployment is massive” according to O’Brien.
When it comes to a policy response O’Brien believes that the Government is caught up in the dealing with banks and public finance issues and has only “messed around the edges of unemployment”.
The reality is, she says: “We are facing an issue that will take a number of years to deal with.”
The reasons behind this part of O’Brien’s analysis are that, unlike the conditions that created the Tiger economy boom, there is no EU money to pump into the economy on the scale seen in the 1980s and 1990s. The construction industry will not return to the level of growth or employment levels seen in the last decade.
This is, O’Brien argues, “a massive challenge for working-class men” who had increasingly found work in the building industry and now, with relatively low levels of educational attainment and labour skills that are often non-transferable to other sectors, are facing a huge problem in securing employment in an economy that is transforming away from its traditional pillars.

RE-EDUCATION AND TRAINING
There is a “huge challenge in investing in job creation and providing the right re-education and training for redundant workers”. The problem, O’Brien believes, is made worse by a fragmented service. Her proposal is for a “real partnership” that links disadvantaged communities to formal education through a joined-up process of certification and qualification.
Summing up this strategy, O’Brien says:
“Adults need to be retrained with skills and qualifications that employers recognise, understand and value.”
In terms of the new unemployed, O’Brien believes that there are a significant number of workers with the wrong skills. In particular, she highlighted a large section of people in the construction and retail sectors, particularly older people and young early school-leavers, who found work during the boom but now don’t have the right skills to find new employment opportunities.
O’Brien also singled out the “professionals linked to the building industry” (solicitors, architects and others) who will never, she believes, find the same level of opportunities in this sector as they did during the construction bubble boom years.

COMING CHALLENGES
Focusing on the coming challenges facing the unemployed and the INOU, An Phoblacht asked about the recent annual delegate conference held in May. What were the issues that had delegates’ attention?
O’Brien said that it was cuts in rent supplements and Community Employment jobs schemes as well as complaints about the increased waiting times dealing with claimants’ cases. “Those who didn’t create the problem are again suffering the most,” says O’Brien.
“A lot of commentators don’t realise that there were social welfare cuts in the last two Budgets,” insists O’Brien. Rent supplements have been cut and rents are not falling at the lower end of the market. When you add in the loss of the Christmas bonus you have a 5% to 8% loss in real income. The increase in VAT hit lower incomes harder also, says O’Brien.
Looking to the medium-term future, O’Brien’s main concern is that while 4% to 4.5% unemployment was acceptable during the boom years, we will be facing into a period where unemployment rates double that will be socially acceptable also.
Though the scale of the problem is “massive” (and this term is repeated by O’Brien throughout our interview) the other thread throughout our discussion is a firm belief on her part that the problem is not hopeless.
Even though she says the Government response is “hit and miss at the moment” and that while “there is no sense of a vision for the labour market in the future” coming from Government, there is a sense that the scale of the problem is so great that it has got “a lot of people who are willing to face the challenge”.
The first steps seem relatively simple. We need, O’Brien says, good services for the unemployed in terms of education and training and a commitment that “scarce resources are well used”.
With the INOU at the coalface of dealing with unemployment there can be no confusing the starkness of the message they are warning of, or the clear solutions they are proposing also.
An Phoblacht
44 Parnell Sq.
Dublin 1
Ireland