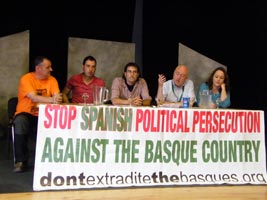 A CONFERENCE on political persecution in the Basque Country was held in west Belfast’s Cultúrlann on Saturday as part of Féile an Phobail.
Organised by the Don’t Extradite the Basques Campaign, more than a hundred people heard Julen Arzuaga, a lawyer from Behatokia, the Basque Observatory of Human Rights, who had travelled from the Basque Country to speak at the conference.
The conference also heard from Iñaki de Juana and Arturo Beñat Villanueva, two Belfast-based Basque activists who are fighting extradition charges by the Spanish Government. Colleen Gildernew, from Kevin Winters Solicitors, the firm representing both men, outlined the legal efforts to defeat the extradition charges.
Introducing the conference, Danny Morrison compared the Spanish Government’s persecution of the Basque pro-independence movement with the experience of Irish republicans over several decades.
“The best way this community can show our solidarity with the Basque people’s struggle for their human and national rights in this period of severe repression by the Spanish Government is by making sure that these vindictive extradition attempts are defeated,” Morrison told conference participants.

DIRTY WAR
The Spanish authorities are trying to extradite de Juana, who served 21 years in Spanish jails, from Belfast, where he moved immediately after his release in August last year, on charges of “glorifying terrorism”.
The arrest warrant is based on somebody at a rally in Donostia in August, which was celebrating de Juana’s release from prison, reading a letter that used the popular Basque expression “Aurrera bolie” (“Forward with the ball”). The Spanish authorities claim this phrase constitutes a call for the continuation of armed struggle.
De Juana was not even present at this rally and denies writing such a letter.
Addressing the conference, de Juana said that the attempt to extradite him and Villanueva represents just the tip of the iceberg of persecution against pro-independence activists. He said the Spanish Government has stepped up its dirty war against the pro-independence movement in recent months.
“The right to freedom of speech, of association, to organise politically, to live in their own country – all of these rights are under constant attack in the Basque Country,” he said.
“Every month, ex-political prisoners are kidnapped, interrogated, tortured by state forces and then maybe released – or as is the case with Jon Anza, disappeared.”
ETA activist Jon Anza disappeared almost four months ago and is presumed to have been killed either directly by, or with the collusion of, the Spanish and French state security forces
“At the very least his body should be returned to his family,” de Juana said.
The former prisoner explained that expressions of solidarity with political prisoners, such as displaying their pictures in public places, is illegal in the Basque Country. He thanked the Belfast Basque Solidarity Committee for organising an event during the Féile in which a large banner bearing the photos of hundreds of Basque political prisoners was unveiled at the Felons’ Club in west Belfast.

ATTACKING DEMOCRATIC RIGHTS
Villanueva then spoke to outline his case, explaining that he was arrested in March 2001 by the Spanish police, with 15 other young pro-independence activists, and accused of being a member of the Basque pro-independence socialist youth organisation, Jarrai.
While Jarrai is a solely political organisation, it was declared illegal by the Spanish authorities in 2005 and categorised as a “terrorist” organisation by Spain’s Supreme Court in 2007.
Charged with “membership of a terrorist organisation”, Villanueva faced a possible 14-year jail sentence for his political activism. Released on bail after 10 months in prison, he did not attend the political show trial.
“I decided to flee and, in January 2004, I moved to Belfast and have been living openly in west Belfast since,” Villanueva said.
“I have been very warmly welcomed by this community and have become part of the community – and I want to take this opportunity today to thank the people of west Belfast for welcoming myself and other Basques.”
Speaking about the legal defence of de Juana and Villanuea, Colleen Gildernew said:
“At his hearing earlier this year, the judge ruled against us, saying that the charge of ‘glorifying terrorism’ had an equivalent under the British Terrorism Act 2006.
She said it was clear from her work in the case that the Spanish authorities were determined “to extract their pound of flesh” from de Juana.
“The worst phrase they could come up with from the Donostia rally was ‘aurrera bolie’ – on with the ball. Academics from the Basque Language Academy testified in Inaki’s hearing that this phrase cannot be seen in any way as extolling terrorism.
“It is also a serious attack on the right to free speech in the Basque Country. If an Irish republican was charged today for glorifying terrorism for saying the phrase ‘Tiocfaidh ár lá’, there would be uproar – and rightly so.”
Gildernew also said that, in Villanueva’s case, the breach of the legal non-retrospectivity principle (whereby Villanueva is accused of being a member of Jarrai between 1994 and1999 but it wasn’t criminalised until 2005 or declared ‘terrorist’ until 2007) was so clear that she was hopeful the case would be dismissed in the near future.

SPANISH REPRESSION
Human rights lawyer Arzuaga, who was himself arrested and charged with being a “member of ETA” for legally representing political prisoners, said that as a lawyer and someone with a high profile he was acquitted but several colleagues of his were jailed.
Arzuaga spoke about the general context of politics in the Basque Country today, saying that the abuse of human rights is being carried out in two main ways – the illegal avenue, which includes, for example, the disappearance of Jon Anza, and the legal avenue.
“The Spanish Government has over the past 10 years introduced a wide range of legislative reforms that give the state the legal cover to go on an offensive against the Basque pro-independence movement through restricting freedom of speech, association, the right to organise politically, etc,” he said.
“Protecting the Spanish Constitution, which says the Spanish state must retain its ‘territorial integrity’, is the justification used for this raft of legislation that has suspended many rights.
“In the Basque Country today, it is legal for the police to arbitrarily arrest someone and hold them in secret, incommunicado detention for five days, where they have no access to the outside world. The torture experienced by incommunicado detainees is well-documented. We are not talking about police brutality here; we are talking about high-level torture including electrocution, asphyxiation, psychological humiliation.
“There is also the denial of the right to ordinary justice – that is, the use of a special, exceptional court, the Audiencia Nacional in Madrid, which was designed to deal with political cases.
Arzuage said that the definition of ‘terrorism’ has been changed in Spanish law over the past decade to be extremely broad.
“Previously the definition of ‘terrorist’ would have been based on a person’s actions aimed at challenging the constitutional regime – of violence using arms or explosives,” he explained. “But, over the past 10 years, a new interpretation has been developed in legislation – to define terrorist as anyone who challenges the constitutional regime through whatever means.
“Now acts of urban sabotage and rioting by young people fall into the classification of terrorism because, supposedly, they could challenge the constitutional order. Now peaceful, public, transparent political activity can be defined as terrorism, as can be seen in Benat’s case, where the youth movement Jarrai-Haika-Segi has been criminalised.
“All forms of social, cultural and political activity that is pro-independence can be viewed as potentially challenging the constitution because Basque independence, or independence for the other nations within the Spanish state, is not a value in the constitution. Being opposed to the monarchy, being a republican, this can also be defined as terrorism because it is against the constitution.”
Villanueva finished the conference by saying it was very heartening to hold such a discussion that could break through the wall of silence surrounding the Basque Country.
“Serious abuses of democratic rights are occurring each day within the Spanish state – at the heart of Europe – yet issues like the electoral fraud against the pro-self-determination party in the recent European elections, the disappearance of Jon Anza and the continuation of the dirty war, the ongoing torture of political prisoners, are not widely known,” he said.
“The attempt to extradite myself and Inaki is actually exposing the Spanish Government’s undemocratic nature to the people of Ireland.”
To sign the petition against the extraditions, go to www.gopetition.com/petitions/dont-extradite-the-basques.html. For more information on the campaign, go to www.dontextraditethebasques.org.
An Phoblacht
44 Parnell Sq.
Dublin 1
Ireland