Minister challenged to live on social welfare for a month 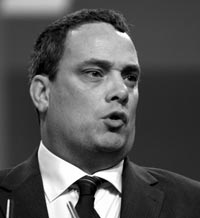 SINN FÉIN TD Aengus Ó Snodaigh has challenged Minister for Social and Family Affairs Mary Hanafin to live on social welfare for a month after the minister confirmed on Tuesday that welfare rates will be cut in the upcoming Budget.
“Mary Hanafin’s announcement that the €21 billion social welfare budget is ‘a huge drain on public finances’ revealed how our government prioritises its citizens. Committing the necessary funds to maintain an adequate standard of living is a burden on the public finances according to this government and should be cut.
“Minister Hanafin has expressed that in her considerations she is looking for the system fairest to all before she takes the axe to the social welfare Budget. I challenge Minister Hanafin and her colleagues to make concerted efforts to live on social welfare for a month, to provide for a small family on the subsistence the state offers to families, to settle the range of debt that Irish people today have accumulated since the death of the Celtic Tiger, all on the welfare payments that the state provides.”

‘DEBT ALL OVER THE PLACE’
Talking about the citizens’  financial advice service, the Money Advice and Budgeting Service (MABS), the minister said that young people between 25-40 have accumulated “debt all over the place that needs to be managed, needs to be controlled”. Following on from this, the minister warned of social welfare cuts.
“Where is the logical reasoning here?” Aengus Ó Snodaigh asked.
“In the same breath the minister talks about the diverse range of debt that has accumulated and then wants to cut the main form of subsistence that most of these people have.
“Putting more staff in MABS will not resolve the underlying problem. The increase in MABS staff is welcome as they will help struggling families to manage their money. However, the minister has confirmed that she will be making their jobs much tougher by cutting the main source of income that their clients have to manage.
“It should be remembered that these cuts will come on the back of the cut to the social welfare rate for the under-21s and the abandonment of the Christmas bonus for welfare recipients, both of which were introduced before the publication of the ‘Bord Snip’ report highlighting that Fianna Fáil already had its eye on welfare rates.
“The McCarthy Report has simply given the Government the political cover for its ideologically-motivated attacks on the unemployed and their families.”
An Phoblacht
44 Parnell Sq.
Dublin 1
Ireland