Party to campaign for second 'No' to same Lisbon Treaty 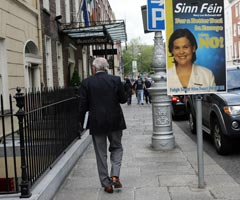 MARY LOU McDONALD: ‘Ireland and Europe can do much better’

SPEAKING following the meeting of the Sinn Féin Ard Chomhairle in Navan on Monday, Vice-President Mary Lou McDonald confirmed that the party will launch a vigorous campaign for a second ‘No’ vote on the Lisbon Treaty.
“Sinn Féin will continue to campaign for a better deal for Ireland and the European Union.
“Following the decisive defeat of the Lisbon Treaty in 2008, Sinn Féin presented the Irish Government with a detailed series of proposals for a better deal for Ireland and the EU. We called on Brian Cowen to use the strong mandate given to him by the electorate to go to his European counterparts and secure a better deal.
“However, as with their mismanagement of the economy, the Government spent the following 12 months dithering and delaying, ultimately wasting the opportunity given to it by the voters.
“Instead of a better deal, the Irish Government has returned with exactly the same treaty as before. Not a single word has been changed. The so-called legally binding guarantees tell us nothing new and change nothing.”

ECONOMIC CRISIS
What has changed, though, Mary Lou McDonald said, is the economic crisis that has engulfed Ireland, the EU and the wider world.
“Twenty years of right-wing market fundamentalism has come to an end and with it the politicians and policies that caused the crisis are now being challenged. These same politicians were responsible for the Lisbon Treaty and the right-wing economic policies they promoted are contained within its pages.
“Sinn Féin believes that a better deal is still possible, and that now, more than ever, a new treaty is required.
“The Lisbon Treaty is part of the failed economic consensus of the past. We need a new treaty for the new times in which we find ourselves.
“In the forthcoming referendum, Sinn Féin will campaign vigorously for a ‘No’ vote. Our campaign will be based on a serious and honest analysis of the treaty and its implications for Ireland and the EU. However, as with the previous campaign, we will also outline what we believe are the positive and progressive alternatives available for those of us who believe that Ireland and Europe can and must do better.”