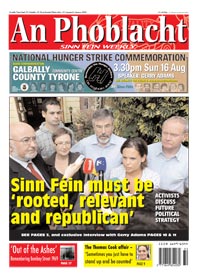 MONDAY saw Sinn Féin activists from across Ireland gather in Navan, County Meath, for a key political meeting. Those attending included TDs, MPs, MLAs councillors, regional organisers and activists as well as members of the party’s ruling Ard Chomhairle.
The Navan get-together was was the culmination of a series of party meetings in recent weeks which discussed this year’s local and EU elections, the upcoming Lisbon referendum and the future political strategy of the party.
Speaking afterwards, party president Gerry Adams said:
“Activists today put forward proposals on a range of pressing issues.
“We discussed Sinn Féin’s ongoing efforts to bring forward outstanding aspects of the Good Friday and St Andrew’s agreements, such as the transfer of policing and justice powers and an Irish Language Act for the North.
“The meeting endorsed the Ard Chomhairle’s decision to oppose the Lisbon Treaty in the upcoming referendum.
“The political establishment in this state has never accepted the decision of voters to reject the Lisbon Treaty last year. The Government, assisted by Fine Gael and Labour, are being untruthful by saying that voters’ concerns on the treaty have been met.
“Sinn Féin will also be vigorously opposing the National Asset Management Agency (NAMA) legislation when it comes before the Oireachtas next month.  This is not the way to sort out the banks and every euro of public money spent on the banks is a euro taken away from education, from health, from social welfare and from job creation.
“Sinn Féin will be supporting local communities fighting to keep resources for all these essential entitlements.”

EDUCATION CUTS
Gerry Adams declared that Sinn Féin will focus particularly on the Government’s cuts in education in the autumn.
“Cutting education is the worst thing the Government could do. It will have disastrous long-term consequences for children and for the economy.  Sinn Féin is committed to opposing this.
“December’s Budget is on course to implement savage cuts to public services and social protections. The McCarthy Report gave some sense of what can be expected. This is the wrong approach.
“Sinn Féin believes that there is massive popular opposition to these punitive measures.  Our party is committed to playing a leadership role in the development of an alternative which will usher in politics based on citizens’ rights and in complete contrast to anti-people policies of the Government and its mirror reflection in Fine Gael.”

Sinn Féin must be rooted, relevant and republican

AN PHOBLACHT EXCLUSIVE INTERVIEW – Gerry Adams on the Reconquest of Ireland