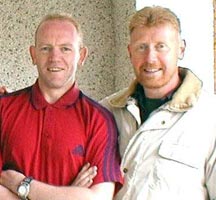 REPUBLICAN prisoners Pearse McCauley and Kevin Walsh were released from Castlerea prison, County Roscommon on Wednesday morning 5 August. McCauley and Walsh are the last of the men convicted in relation to the death of Garda Jerry McCabe to be released. They have served their sentences in full despite them being qualifying IRA prisoners under the terms of the Good Friday Agreement.
At the time of his arrest Pearse McCauley was subject to extradition proceedings by the British Government and could have been served with an extradition warrant on his release.
It has emerged that the British extradition warrants against Pearse McCauley and two other republicans, Nessan Quinlivan and Tony Duncan, have now been rescinded and they will not be subject to any further legal proceedings.
Speaking following the release of the two republicans, Sinn Féin President Gerry Adams said:
“In a public statement some years ago the IRA members convicted in relation to Jerry McCabe’s death and the wounding of Garda Ben O’ Sullivan, expressed their deep regret and apologised for the ‘hurt and grief we have caused to their families’.  I believe that this apology was genuine and it echoes the sentiments of republicans everywhere. I deeply regret the great loss and hurt suffered by the McCabe and O’Sullivan families.
“The release of Kevin Walsh and Pearse McCauley comes at the end of their sentences, despite them being qualifying IRA prisoners under the Good Friday Agreement.”

NO EXTRADITION
Sinn Féin TD Martin Ferris welcomed the decision of the British Attorney General to stop extradition proceedings against a number of republicans.
Ferris said:
“Sinn Féin welcomes the decision by the British Attorney General to waive the warrants in these cases and to stop any extradition proceedings.
“This will be a relief to the men and their families.”

Gerry Adams talks to the press after the releases