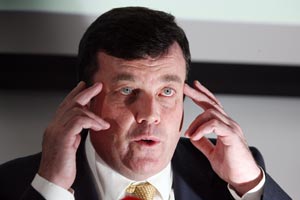 BRIAN LENIHAN: Modern day oligarch with little experience or qualifications for the job

NAMA, the biggest bank and business bailout in Irish history is less than seven weeks from becoming law, but we still don’t know how much it will cost, or how long it will be operational for.
We do know that Finance Minister Brian Lenihan will become head of the world’s largest property company, with authority and resources that will make him the most powerful person in Irish public life, with only a tissue of Oireachtas oversight. We also know that he has little experience or qualifications to take on such a posting.
We do know that only a handful of the banking executives who steered the Irish banking sector into this disaster have lost their jobs. None of them had to occupy their offices to secure better redundancies as the Thomas Cook workers did this week.
The failed banking executives all left work with golden handshakes, company cars and seven figure pension payouts. We do know that not one of them has been arrested.
We do know that there will be no real change in how the Irish banking sector will be run, and that any new faces running banks and building societies will have been approved by the same boards who lent so recklessly that over €90 billion in debt remains unpaid.
We do know that approximately 10,000 loans will be taken over by NAMA, and that in one single case there are accumulated loans of €2.8 billion all unpaid, all owed by just one person.
This glimpse of the scale of collapse in the Irish property sector was only brought into the public domain through the last ditch court battle of property developer Liam Carroll to stave off bankruptcy proceedings.
Sinn Féin’s Arthur Morgan summed up the NAMA failings when he said last week that, “the people are picking up the tab” while “Fianna Fáil and the Greens continue to bolster the banks and protect reckless developers”.
Morgan said that the government was perpetrating the crime of the century, and that “Every euro of the ten billion, already pumped into Anglo, AIB and Bank of Ireland on top of the astronomical cost of NAMA is a euro being taken out of vital public services such as education, health, job creation and the delivery of critical infrastructure. And the weight of debt on future generations is as yet immeasurable”.

The top five problems with NAMA

1. NAMA creates a banking and building tzar
Brian Lenihan has produced legislation that makes him in the mould of a modern day oligarch with powers so sweeping and extensive they are unparalleled in any other market democracy. The finance minister can “direct” NAMA to take actions such as disposing of loans, forcing banks to engage with NAMA, selling property and sites, even merging banks if he sees fit.
All of this can happen without any consultation needed by the Dail or Senate, any of its committees, or even the cabinet.

2. How will NAMA calculate the value of the loans it is taking responsibility for?
The €90 billion owed by property developers is based on land valuations and property prices at the height of the pseudo boom.
With the housing and commercial property market at a standstill, how do we know how much this land is worth now? In some cases what’s seen as prime development land is now only worth only a fraction of its development price.
Last week CR Richard Ellis, the world’s largest real estate broker reported that “Dublin’s office vacancy rate rose to the highest in at least 18 years in the second quarter and may jump to 27 percent in 2010 as new buildings are completed during Ireland’s worst recession”.
A lot of the property in the NAMA portfolio could be worthless. Brian Lenihan claims that the price NAMA will pay to take on bad loans will be “adjusted to reflect a longer-term economic value” but we have no detail on how this valuation process will work.
UCD economist Karl Whelan, who coined the term “BaNAMA Republic”, said in May that “There are good reasons to expect that even after recovery, we will never return to the rates of growth seen prior to 2008.” So it is impossible to actually give any real long term economic value to these assets. It is at best a guess.

3. How much property and land is there?
At best we can only guess what is the extent of the land bank and property portfolio that NAMA will take over. Why are we not being given a clearer picture of the assets that the Irish tax payer will take responsibility off?
News media reports have hinted that there are large developments and land banks in the Six Counties, Britain and into central Europe, yet we have no details. How can we have the “informed debate” promised by Brian Lenihan when yet again so much information is being kept out of the public domain?

4. Where is the social dimension?
There has never been an opportunity as great as this to democratise planning and building development in Ireland. Dublin and many of Ireland’s other town and cities have been blighted by decades of development driven by short-term quick profits.
We have never adequately housed the people of Ireland. Government has never built remotely adequate transport, educational, health and other social infrastructure that makes for a healthy and happy society.
The development of rural Ireland has been ignored because it wasn’t offering the profits of quickly built, often ugly and long-term valueless city developments. We got car parks rather than play grounds, golf courses rather than schools and kennel-like flat complexes that breed crime and inequality rather than building communities.
Now we have an opportunity to democratise development in Ireland and put local authorities and the communities they represent in the driving seat of planning the infrastructure of the future.
There are hints that the Greens are promising retaining set percentages of land for community and social developments, but it is not in the bill now and is only a piecemeal gesture at best.

5. Why not nationalise the banks?
Even the IMF have come on board with the proposal for the temporary nationalisation of Irish banks, a route taken by Sweden when they faced a similar crisis, yet NAMA ensures the banking golden circle will be untouched by the crisis. Why?