An open letter to Drew Nelson 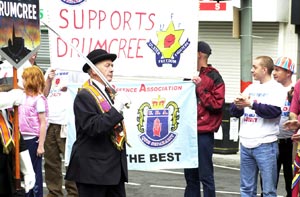 PARADES ISSUE: Orange Order must address their concerns in a dignified way

ORANGE ORDER Grand Secretary Drew Nelson has rejected outright appeals from Sinn Féin President Gerry Adams to talk directly to Sinn Féin on resolving the issue of the few Orange parades that are controversial and potential areas of conflict and confrontation.
In his Léargas blog last Friday (31 July) for the Belfast Media Group, Gerry Adams renewed his efforts to get Orange leaders who want to walk to first sit down and talk. Here is his response to Drew Nelson.

REGULAR readers will remember that this blog wrote recently about Orangeism and the need for dialogue to resolve contentious orange marches.
At the Twelfth July celebrations, Drew Nelson, the Grand Secretary of the Orange Order, rejected any talks with Sinn Féin.
But this blog is not for giving up on our Orange brothers and sisters.  I penned an open letter to him which the Belfast Telegraph carried this morning (Friday 31 July).
I addressed the issue of ‘respect’ which Drew raised and pointed out that “respect, if it is to be meaningful, must be mutual.  If the Orange Order seeks ‘respect’ from others, then it in turn must respect the views of those who differ from them, and address their concerns in a peaceful and dignified way.”
Nowhere is this more necessary than in respect of those “parades through or fringing sensitive areas, where little or no respect has been shown to local residents. The annual insistence on contracting loyalist paramilitary or ‘Kick the Pope’ bands, the appearance of UDA, UVF and YCF flags and bannerettes and the refusal to countenance alternative non-contentious routes, is hardly indicative of a manifestation of respect or Christian forbearance.
“Mutual respect could also be demonstrated if the Orange Order and indeed all the loyal orders could agree to a process of meaningful dialogue with the political representatives of the nationalist community.  This should not present a difficulty for the leadership of the Orange Order whose members have, over the years, held discussions in Belfast and beyond with myself and other republicans.”
I reminded Drew that the Orange Order declares itself to be “Christ-centred, Bible-based and Church grounded” and in 1998 it agreed with the heads of the main Protestant Churches that you “cannot refuse to talk to anyone made in the image of God”.  How do these declarations reconcile with your continued refusal to meet with Sinn Féin?
Drew Nelson accused me of glorifying IRA killings and demanded an apology, in particular for those 273 Orange members killed by the IRA.
In my open letter I tell him that I have never glorified IRA killings and I again “expressed my sincere regrets for the deaths and injuries caused by republicans. This includes members of loyal institutions”.
But I posed a number of questions to him. The Twelfth resolutions state that 335 members of the Order were killed. Who killed the remaining 62?
“Was it a direct or indirect result of membership of loyalist paramilitaries? Were some brethren killed by members of the British crown forces, the same crown who you reaffirm your devotion and loyalty to every Twelfth? How many nationalists were slain by Orangemen in loyalist paramilitary groups? Or in the British crown forces?
I draw his attention to some examples of paramilitarism with the Orange Order, for example, one Belfast lodge that is renowned for its UVF connection is the Old Boyne Island Heroes LOL 633.  Their bannerette listed six UVF lodge members who were killed in the recent conflict.
Six years ago, this same lodge took part in the contentious Whiterock parade along the Springfield Road. One of those taking part was Eddie McIlwaine, adorned with Orange sash, who was sentenced to eight years for his part in the Shankill Butchers’ campaign of terror.
There is a reference in the Bible which seems very appropriate at this point which says:
“Thou hypocrite, first cast out the beam of thine own eye; and then shalt thou see clearly to cast out the mote of thy brother’s eye.” (Matthew 7:3-5 – King James Version)
I said all of this not to make dialogue more difficult but to emphasis the need for all of us to set aside our differences in the interests of finding solutions.
The reality is the political and social and financial costs and risks presented by parades disputes are too great to ignore. “The Orange Order and orangeism is a part of who we are as a nation. Irish republicans want a dialogue with the Orange in order that we can each understand and appreciate the position of the other.”
This blog and Irish republicans accept the right of the order to parade and to promote its sense of orangeism. “But this has to be on the basis of equality and mutual respect and tolerance. The overwhelming majority of Orange parades take place without rancour or dispute. But there are a small number which each year give cause for concern.”
And in my letter I again ask Drew Nelson and his colleagues to engage in dialogue with “local residents and with Sinn Féin and let us together seek to resolve these in a common sense and respectful manner. Our door is open.”

NOTE: For those who are interested, the six names on the Orange banner belonging to Old Boyne Island Heroes LOL 633 are:–

Aubrey Reid
Killed in a premature explosion while on ‘active service’ for the UVF;

John Bingham
A UVF commander shot dead in 1986 – he received an Orange funeral with members of his lodge flanking his coffin wearing traditional regalia;

Brian Robinson
A UVF and lodge member shot dead on 2 September1989 by a British Army undercover team, just after he shot dead a Catholic resident of Ardoyne, Patrick McKenna – he also received an Orange funeral;

Bobby ‘Basher’ Bates
Also a UVF and lodge member, part of the Shankill Butchers gang which savagely killed many Catholics, shot dead by a fellow loyalist in a revenge attack;

And, finally,
Colin Craig
Another UVF and lodge member, shot dead by the INLA in 1994 (he was initially featured on the bannerette but removed when it was alleged that he was an informer).

This article is taken from Gerry Adams’s blog at:
leargas.blogspot.com