Sinn Féin - representing all the citizens of west Belfast 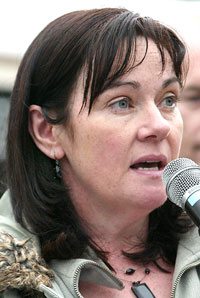 IN a recent media attack on Gerry Adams, former loyalist leader Davy Adams accused the west Belfast MP of failing the unionist people of the constituency. Davy Adams said that “to the best of my knowledge, [Gerry Adams] has yet to provide a single job, or indeed lobby on their behalf for anything”.
A few phone calls about Sinn Féin’s constituency service would have enlightened a very unenlightened Davy Adams but then perhaps that would have taken away his reason for making his criticism in the first place.
The truth is that many working-class unionist areas in west Belfast and other places have been abandoned. With the exception of some church and community representatives, including women’s groups and some very fine teachers, most unionist areas have been left to their own devices.
Sinn Féin has always sought to provide a constituency service for these areas despite the obvious difficulties. And in recent years this has moved up several gears.

INITIATIVES
Gerry Adams, as MP for west Belfast, along with our council and Assembly team, has advocated or spearheaded initiatives and interventions which have brought investment, jobs, policy change and social programmes to unionist working-class communities in the Shankill.

In addition, and this is not unique to west Belfast, increasing numbers of people from unionist areas are availing of our advice service.
There is also ongoing work on behalf of citizens in a number of smaller unionist neighbourhoods.
Why do we do this? Because we believe that it is our responsibility to work on behalf of all the people of west Belfast, not just the republican voters. We do our best to represent everyone and to act as advocates for people in trouble, particularly working-class people.

INCLUSIVE
We are also very mindful as we move ahead with our campaign to achieve Irish reunification that unionists in places like west Belfast, where they are in a minority, will judge how they might be treated in a united Ireland by how they are treated in these constituencies.
If we are serious about achieving a united Ireland and of persuading unionists, or a section of unionism, that this is the best way forward, then we must demonstrate now our determination to make that new Ireland inclusive and one in which they can feel at home and comfortable in.