Now is the time for republican politics 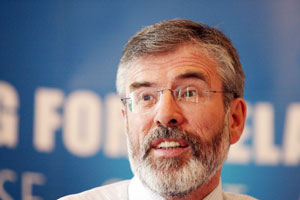 
SINN FÉIN’S campaign to progress Irish reunification has struck a few nerves. Not since the early days of the Peace Process has such an alliance of disparate political elements found common cause to attack the party, republicans in general and me féin in particular.
The SDLP and DUP and UUP and Fianna Fáil and some so-called ‘dissidents’ and others in the media have condemned Sinn Féin for daring to raise the right of the people of Ireland to reunification and independence.
So, Sinn Féin is wrong to engage with the Irish Diaspora and to win their support for a new phase of activism.
The fact that Irish-America and the Diaspora have played such a positive role in the past seems lost on the detractors.
The need to engage with British public opinion is dismissed. Our intention to build a campaign in Ireland, including local conferences, is also rubbished.
‘And why raise this issue now?’ we are asked.
We are rebuked by some who say that this issue should not be raised in the midst of an economic crisis – we are told it’s not the right time.
But then when would be the right time?
The reality is that partition created two conservative states on the island of Ireland. Look at the history of discrimination and inequality and repression and poverty in the Northern state! Look at the recent Ryan report and the manner in which successive Irish governments abdicated any responsibility for the welfare of children and young people to abusive systems in the Southern state!
The social, political and economic impact of partition has been profound and, despite the progress of recent times, partition continues to cast a shadow over our affairs.
So now is exactly the right time to have the debate about Irish reunification.
Now is exactly the right time to move the effort to achieve  Irish unity up a gear, to move it up the political agenda, and to persuade others (especially unionists) that Irish reunification is in the interests of all of the people of this island, including them.
So this blog is pleased that the old guard of revisionism has re-emerged. They could always be relied upon to overstate their case. So too with their predictions that Sinn Féin is in decline. Or that the party is heading into a split. Wishful thinking.
Sinn Féin certainly faces challenges. But that is what struggle is about and the party is debating the issues involved in an open and thorough way. I am absolutely confident that we will conclude that debate over the summer and face into what will be a winter of discontent in the wider political systems on this island, in a united and intelligent way.
The resignations of a small number of Sinn Féin councillors has also been seized upon by our detractors in a futile attempt to promote their flawed analysis. Sure, these resignations are disappointing. But that’s politics.  Those involved have their own reasons for resigning, mainly sited in local issues. That is their choice – the wrong choice in my view but that’s the way it goes and it’s hardly the end of Sinn Féin.
This activist has no intention of resigning. There is much to be done.
As citizens face greater economic punishment at the hands of an incompetent Dublin government, and as rejectionists in the North gear up for more negativity, our duty is to face the future with confidence and to stand up for decent politics, fairness and equality. And a reunited Ireland.
That is what leadership is about.
The time for republican politics is now.

This article is taken from Gerry Adams’s blog at:
leargas.blogspot.com

• In the Euro elections Sinn Féin took 331,797 votes, making it the third biggest party in Ireland