McAnespie family reiterate call for Garda report to be made available 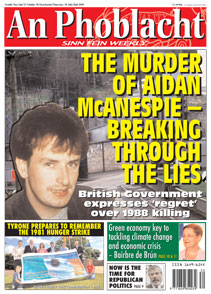 THE British Government this week expressed “deep regret” for the killing of Aidan McAnespie who was shot dead as he walked through a British Army checkpoint in County Tyrone in 1988. Aidan was fatally injured after being shot by a British soldier, Grenadier Guardsman David Holden, as he made his way to a GAA football match.
In a statement on Monday, British Secretary of State Shaun Woodward and British Defence Secretary Bob Ainsworth acknowledged the “pain and suffering” of the family after their youngest son’s death.
The McAnespie family, accompanied by Sinn Féin MLA Michelle Gildernew, Fianna Fáil Senator Mary White and Paul O’Connor of the Pat Finucane Centre, met the British Secretary of State at Hillsborough.
In a statement released, “on behalf of the British Government”, Secretary of State Woodward said:
“It is a matter of deep regret that Aidan was killed by a bullet fired by a soldier which ricocheted from the road.”
The inclusion of a description of the bullet as “ricocheted” is highly significant and highlights the fact that, despite persistent evidence to the contrary, the British Government is still backing the original ‘official’ account of the killing even though it has been totally discredited by investigators.

MIRE OF LIES
The mire of lies that has accompanied the killing of Aidan McAnespie – lies peddled by the British Army, and endorsed in their turn by the RUC, NIO, DPP and the British Government – became even more difficult to sustain after recent findings by the British state’s own Historical Enquiries Team.
The HET questioned the validity of the ‘official’ version of events and declared the British Army’s explanation as “the least likely” to be true.
As for the notion of ricochet, the HET found it so unlikely that it could be dismissed. Faced with the dilemma of dealing with two contesting ‘official’ views, Shaun Woodward attempted to paper over the cracks.
The British Secretary of State refused to “either accept or comment” on the HET’s findings, restricting himself to a general endorsement of their role and work.
“It is not for the Government either to accept or comment on the specific HET findings. However, in overall terms, the Government endorses its work and has confidence in the HET’s professionalism and thoroughness.
“Since part of the objectiveness of the HET is to bring solace and comfort to families and loved ones, we hope this will be the case for Aidan’s family.”

FAMILY
Responding to the statement, McAnespie family member Una McCabe said “given the finding of the HET report, we find it highly significant and positive that the [British] Minister of Defence has co-signed this public statement along with the [British] Secretary of State”. Una added:
“For years we have fought for truth and acknowledgement. The HET report, in our view, represents the closest we as a family have got to the truth of what occurred that day. The meeting with Shaun Woodward is the acknowledgement that was missing.
“The British statement must be taken as a whole. Mr Woodward says he is confident of the work of the HET which concluded the [British] Army’s explanation was the least likely version of events.”
As for the ricochet, Una reiterated the HET’s view that the chances of it being true were so remote that it could be dismissed.
Una is the daughter of Aidan’s sister, Eilish, who campaigned for over 20 years for the truth about her brother’s killing until her own untimely death last year. Close to tears, Una recalled reading the HET report to her mother on her deathbed.
Sinn Féin MLA Michelle Gildernew said:
“The McAnespie family have fought a long campaign for the truth and deserve immense praise for the way they have confronted a system intent on cover-up and concealment.”
At the meeting, Aidan’s elderly parents recounted the constant harassment of their son by British soldiers as he passed through the permanent checkpoint at Aughnacloy prior to the killing.
The family had repeatedly reported British Army harassment, including death threats, to the RUC. In one incident, Aidan’s father, John McAnespie, was told by a British soldier: “I’ve a bullet here in the gun for your son Aidan.”
British Grenadier Guardsman David Holden, who admitted responsibility for the fatal shooting, claimed Aidan’s death had been the result of an accidental discharge. Holden said his finger had slipped onto the trigger as he was moving a machine gun in the watchtower. The soldier claimed his hands had been wet because he had been cleaning the sangar.
To support their claim of an accidental discharge, the British Army said three shots had been fired, the fatal shot ricocheting off the road, but even this has been disputed. It has never been established that Aidan died as a result of a ricochet.
At a second autopsy carried out at the behest of the Dublin Government, the state pathologist, Dr Harbinson, initially identified a single aimed shot but he couldn’t confirm his findings without accessing the damage to part of the ribcage close to where the shot entered the body. The section of ribcage was missing. Under pressure from the British, Harbinson later changed his story.
Local people living nearby have reported that, after the killing and under the cover of darkness, the British Army “staged” evidence by firing three shots at a red light placed at the spot where Aidan had died.
The British Army subsequently claimed they had returned fire after coming under attack that night. No attack took place.
Strike marks on the road were subsequently used to support the ricochet theory.

CHARGES DROPPED
Initially, Holden was charged with manslaughter but all charges were later dropped by the Director of Public Prosecutions. No explanation was given.
A probe into the killing conducted by the HET last year identified a series of crucial flaws in the British Army’s version of events:–

The HET team concluded that “the chances” of the fatal shot having been random “seemed so remote in the circumstances that they can be virtually disregarded”.
Clearly, the fact that Guardsman Holden was never charged with murder, and even the lesser charge of manslaughter was later dropped, was not based on the credibility of his account. If it was a political decision, it might account for the reluctance of the British Government to fully endorse the limited findings of the HET.
At the time of the killing, outrage had prompted workers at a poultry-processing factory in Monaghan, where Aidan had been employed, to stage a mass vigil demanding to know why their co-worker had been shot dead.
Public anger at the apparently arbitrary execution at a British Army checkpoint led to a campaign to reopen alternative routes previously rendered impassable by the British Army.
The then Catholic Primate of All Ireland, Cardinal Ó Fiaich, who attended Aidan’s funeral, also referred to the death as murder. Public pressure finally prompted the then Fianna Fáil Government to initiate a Garda investigation.
Witnesses were encouraged by family to give their evidence to the Garda investigation. Many did but over two decades later the results of that investigation have never been made public.
The McAnespie family have reiterated their call for the Garda report to be made available.
Speaking after the British statement of “regret”, the McAnespie family said they have “gone as far with the British Government as we can”. The family now hope the Irish Government will take the next step and release their report into the killing.
Sinn Féin Dáil leader Caoimhghín Ó Caoláin described the expression of regret by British Secretary of State Shaun Woodward and the British Defence Minister as “coming very late in the day”.
“The statement highlights the years of lies from the British Government, the British Army and the RUC about the murder of Aidan McAnespie. It also causes further insult by asserting again that Aidan McAnespie was killed by a ricochet, a self-serving claim that has no credibility.
“Aidan McAnespie was killed after he had been subjected to years of harassment by the British Army and the RUC. It must be recorded that the British Army and the RUC were facilitated in their conduct towards Aidan, and many others like him along the border, at the time by the attitude and actions of the forces of the Southern state.
“Like others who participated in that inquiry, I find it totally unacceptable that the report is still being kept secret after over 20 years. The Minister for Justice, Equality and Law Reform should now publish that report”
Meanwhile, DUP MP Nigel Dodds said that, while he also regretted the death, the British Army had nothing to apologise for.
“As far as the DUP is concerned, the [British] Army and the security forces generally have no apology to make as an organisation for what they did in Northern Ireland.
“On the contrary, we believe the Army deserves praise for their actions in fighting terrorism.”

• Una McCabe (right) niece of Aidan McAnespie who was killed by a British soldier’s bullet, alongside family members, Margaret McAnespie (sister) and Ryan McAnespie (nephew), at a press conference on Monday with Paul O’Connor from the Pat Finucane Centre