Seán Begley appeals for maximum mobilisation to honour our heroes 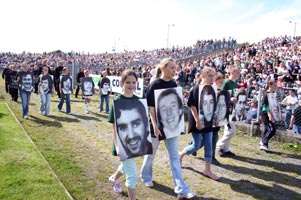 RALLY CALL: Plans are already in train to maximise attendance and participation in this year’s events

TYRONE will host this year’s National Hunger Strike Commemoration weekend. The annual event has previously been held in Derry and Belfast. This year will see its first visit to County Tyrone.
The venue for the main parade on Sunday 16 August will be Galbally, the birthplace of the sixth hunger striker to die, Martin Hurson. Martin died on 13 July 1981 after 46 days of hunger strike. His death had a profound impact on the local community and the wider Tyrone area.
The commemoration will commence in Galbally at 3.30pm. The march will go from Galbally Chapel, where Martin is buried, to the Republican Monument in Cappagh Main Street, where Sinn Féin President Gerry Adams MP will address the commemoration.
Tyrone Hunger Strike Committee Chairperson Seán Begley says that plans are already in train to maximise attendance and participation in this year’s events.
“Tyrone was a hive of activity throughout both the 1980 and 1981 Hunger Strikes. It was a microcosm of many communities in the North of Ireland at that time. Towns like Dungannon, Galbally, Ballygawley, Omagh and Carrickmore became focal points for marches, torchlight processions and numerous vigils.
“It is also worth noting that people in the areas of south Tyrone such as Dromore had voted in great numbers and elected Bobby Sands as their MP during that period.
“So, 28 years on, we will be remembering the legacy of the Hunger Strikes in Tyrone and aim not only to remember these events but educate a generation who were alive during those turbulent events in 1981 and new generations who have grown up since those momentous, tragic yet heroic times.
“I urge republicans throughout Ireland and abroad to keep Sunday 16 August free and to come to Tyrone and remember the sacrifice of the ten men who died in 1981. It is a watershed in Irish history in the same way as 1916 was and should be remembered in the same manner.
“We aim to play our part in remembering the H-Block Martyrs in this manner and I hope that thousands of others will do likewise by attending the National Hunger Strike Commemoration.”