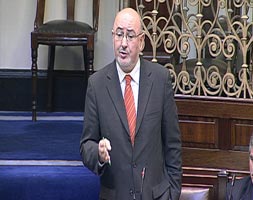 TAOISEACH Brian Cowen and Health Minister Mary Harney were centrally involved in the decision to axe all acute services at Monaghan General Hospital and transfer them to the already over-stretched Cavan General Hospital from 22 July, revealed Sinn Féin Dáil leader Caoimhghín Ó Caoláin when speaking in a Dáil adjournment debate on the issue.  Ó Caoláin said:
“I have been reliably informed from within the HSE that the Taoiseach Brian Cowen and Minister for Health & Children Mary Harney were closely involved in the decision to axe these services on 22 July.
“Just look at the timing. These services were signalled by the HSE to go in November 2008; then at the start of this year; then in the early summer. But the local and European elections loomed and the axe was hidden until polling day had passed. That axe was merely being sharpened and, lo and behold, two days before the Dáil goes into recess until September, we have the announcement that the axe will fall on 22 July.”
Addressing the Dáil during the adjournment debate last week, on the day before the summer recess began, Deputy Ó Caoláin said:
“This is a national matter with consequences for hospitals across the country. Monaghan is the blueprint for this Government’s policy of slashing services in local hospitals and what they are doing to Monaghan they plan to do to other hospitals in Dundalk, Navan, Nenagh, Ennis, Tralee and Cork, with still others likely to follow.
“This represents nothing short of a healthcare disaster for the people of Counties Monaghan and Cavan and beyond. It flies in the face of all appeals from frontline healthcare workers, including nurses, GPs, consultants and support staff and from the community across all political affiliations and religious beliefs.
“From 22 July, lives will be at risk day and night because we will lose vital hospital services, including emergency services and inpatient medical care. Lives were lost when Monaghan General Hospital was ‘off-call’ for emergencies in the past and now another fatal date has been set.
“Where will patients go who would have received care at Monaghan, some 3,000 of them per annum? They will go primarily to Cavan General, a hospital that is already working at full stretch and beyond. And not a single additional in-patient bed is to be provided at Cavan. They will also go to the Lourdes in Drogheda, another hospital that is bursting at the seams.
“Deputies Margaret Conlon and Rory O’Hanlon have pointed out that all the promised support services due to be put in place before the axing of acute care at Monaghan have not been put in place. That is true but I will return to those deputies in a moment.
“Let me say very clearly that even if all the promised supports were put in place this would still not make the execution of Monaghan General Hospital acceptable or safe.
“In the HSE’s confidential so-called ‘Transformation’ planning document of April 2008, which I revealed at the time, ‘rehab/respite/step-down’ facilities are described as ‘alternatives to acute in-patient care’. Of course, they are no such thing. They are distinct needs from acute inpatient care.
“Their availability may free up some beds inappropriately occupied but they are not alternatives to acute inpatient care for those who require it. And, I repeat, not a single additional in-patient bed is being provided.
“That HSE document also stated that ‘four out of ten patients who currently present at the Monaghan Treatment Room will continue to be seen at the Minor Injuries Unit’. In other words, 60% of the patients who currently present will have to go to Cavan.
“The decision represents an attack on the health services by this Fianna Fáil/Green Government and a betrayal of the people by the Fianna Fáil TDs for Cavan and Monaghan  – Deputies Margaret Conlon, Rory O’Hanlon and Brendan Smith.
“They shed crocodile tears here this evening but this morning they voted with the Government and could not bring themselves even to abstain in the vote I called to allow all deputies to register a protest at what is being done to Monaghan General Hospital. That would have led to a Government defeat in the vote and catapulted the issue to major national attention.
“This evening, on Drivetime on RTÉ Radio, Deputy O’Hanlon actually had the gall to blame those courageous people who have campaigned in defence of the hospital for the removal of services! We should all have stayed quiet while our betters decided what was best for us. Those days are long gone.
“Deputy O’Hanlon and his colleagues should hang their heads in shame because their inaction has helped to bring about this mortal attack on a hospital that has served generations of County Monaghan people.
“But my final words are not for the Fianna Fáil TDs. It is for the stalwart people of County Monaghan who have stood by their hospital over many years and who will continue to stand by it, and for the excellent staff of the hospital. We have opposed this move not, as our opponents try to suggest, on grounds of sentimentality or to wear a county jersey or for narrow party political reasons but because it is a vital facility for the safe delivery of healthcare services for the people of the border region and for those who pass through it.”

COWEN AND HARNEY: Closely involved in the decision to axe services