'An Bord Snip' leaks softening up voters for winter Budget 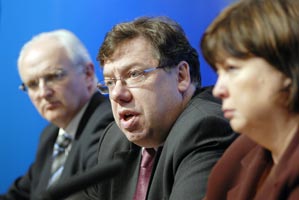 CONFUSION reigns as the Fianna Fáil/Green Party Coalition serially leak key parts of the delayed report from the Special Group on Public Service Numbers and Expenditure Programmes (nicknamed ‘An Bord Snip Nua’) with its 500 proposals and government spending cutbacks of over €5 billion. The Coalition are already planning spending cuts of €1.5 billion and new tax hikes of €1.75 billion for the 2010 budget.
An Bord Snip Nua were asked to examine all aspects of Government spending, to “identify options for savings” and “also ensure that public expenditure is being used to address relevant priority policy objectives”.
Now the group’s findings have been leaked day after day to the Irish news media for more than three weeks, while TDs have yet to debate what could be the most damning report ever published on how the Government spend our taxes.
“When we see it, we’ll see what way we’ll deal with it,” was the promise made by Fianna Fáil leader Brian Cowen, speaking in Leinster House on 30 June on the report.
“It should be with the Minister of Finance probably by next week,” said Cowen, adding: “A lot has been very much completed, I understand, and finished.”
While Brian Cowen seemed unclear on when the Bord Snip report was completed or whether it would be published, the news media reports had the inside track.
We know, for example, that the last meeting of the six-person group headed by UCD economist Colm McCarthy was on 30 June and a final copy of the report was in Government hands by 3 July.
Individual Government departments had been shown sections of the report as part of the consultation and figure checking process in the weeks before Monday 29 June.
Yet the report has not been published, the Dáil has not been given a chance to debate it and with the summer break beginning today, 16 July, there will be no discussion of the report’s findings until the Dáil reconvenes in September.

COWEN U-TURN
On 6 July, Brian Cowen suggested delaying the publication of the report. Yet, on 9 July, after speaking at the ICTU conference in Killarney, Cowen did a U-turn, telling reporters:
“It is very important the public be aware of what the full range of choices and issues are. They are all difficult, there are none of them painless and none of them easy and it would always be our intention to keep people informed to the greatest extent possible.”
Cowen claimed:
“That is the best way of ensuring people understand the approach of Government. While I understand the immediacy of the media agenda, Government has to receive it formally, ministers have to consider it and discuss it, and we will take it from there.”

500 separate recommendations
The report wasn’t published but, three days later, the Sunday papers had yet another round of detail on what we are reliably told are 500 separate recommendations.
This week, the Taoiseach has met with individual ministers and, as An Phoblacht goes to print, the Cabinet have finally been discussing the report, even though last week The Irish Times said the Cabinet would not discuss the report until 29 July.
However, whatever the value of the work of the review group, its efforts have been seriously damaged by the media leaks, the Government prevarication on the issue and the backdrop of negative publicity on the question of public sector wages and college fees and other Government spending policies.
It is hard not to believe that there is not a deliberate Government agenda at work here, generating negative publicity around spending and buttering up voters. For what? For serious reductions in not just social welfare payments but key frontline health, social and educational services, while nearly a year into a deepening recession and an unprecedented fiscal crisis we still do not have an economic stimulus package that will protect and create jobs or a banking sector tenuously open for business.

Compiled by comparing leaks across the Irish news media on the review group’s 500 recommendations.

15,000 to 20,000 over four to five years, according to the Sunday Business Post, 30,000 public sector jobs in the Sunday Tribune while the Sunday Times is cutting 20,000 civil service jobs, saving €1 billion. This week, the Irish Independent repeated the 20,000 job cuts, €1 billion saving proposal calling it a “slashing of public sector numbers”.
The Business Post also suggested the job cuts will be in the Health Service Executive and the Garda. On 28 June the Tribune had been more specific reporting the closure of “half of all rural Garda stations”, cutting numbers by 1,000 officers.

A 3% to 5% drop in payments from the Sunday Business Post was reported on 12 July. The Tribune had put the figure at 7% on 28 June. On 5 July, the Post had claimed that there would be social welfare cuts of up to €2 billion with the abolition of “a number of social welfare programmes and entitlements”. The Irish Times went further on 30 June, reporting that child benefit would be cut, as would rent supplements.
The 12 July Sunday Tribune proposed a €1.5 billion reduction in the total social welfare budget. The Sunday Times reports cuts of up to €1.8 billon.

The Sunday Times will break up the Department of Community, Rural and Gaeltacht Affairs. Rural Affairs will go to the Department of Agriculture with the Community section going back to Social and Family Affairs, the Irish Times this week restated.
A new Department of Public Sector Reform will be created. “Dozens of state agencies” will be either closed, merged or become part of their parent departments.
The pooling of six Ombudsman offices is also proposed, according to the Sunday Times, while the Tribune tells us that the Ombudsman for Children Office will be “axed” with the Pensions Board and Health Insurance Authority becoming part of the new Financial Regulator.
The Business Post focuses on the rationalisation of FÁS, Enterprise Ireland and Shannon Development without giving specific details. On 28 June, the Tribune also put the Irish Film Board and Fáilte Ireland on the chopping block.

On 5 July, the Sunday Business Post reported that the review board are “recommending major pay cuts for hospital consultants” as well as “ changes to the pharmacy system and the General Medical Scheme” without giving more details.