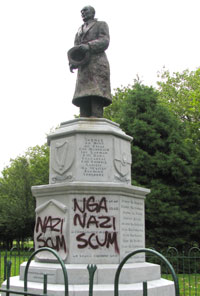 ON Tuesday night/ Wednesday morning the plinth around the newly erected statue to Seán Russell in Fairview Park, Dublin was sprayed with slogans implying that Russell himself and the National Graves Association who erected the statues, were Nazi supporters.
Russell was a veteran of the 1916 Rising and IRA Chief of Staff during the bombing campaign in England, launched in 1939.
The statue, which was badly vandalised four years ago, was only replaced with a bronze sculpture in the past two weeks.
The 2004 atack followed a year-long campaign in the Sunday Independent aimed at discrediting Russell’s memory and was claimed by a previously unknown group claiming to  be anti-fascists.
Expressing abhorrence at the latest attack Matt Doyle of the National Graves Association told An Phoblacht on Wednesday: “We’re shocked at the whole incident. The monument as it stands now in its desecrated state is actually a monument to gross ignorance.  These people describe themselves as anti-fascist but they won’t even have the debate on the man. What Irish patriot will be targeted next?”
An Phoblacht
44 Parnell Sq.
Dublin 1
Ireland